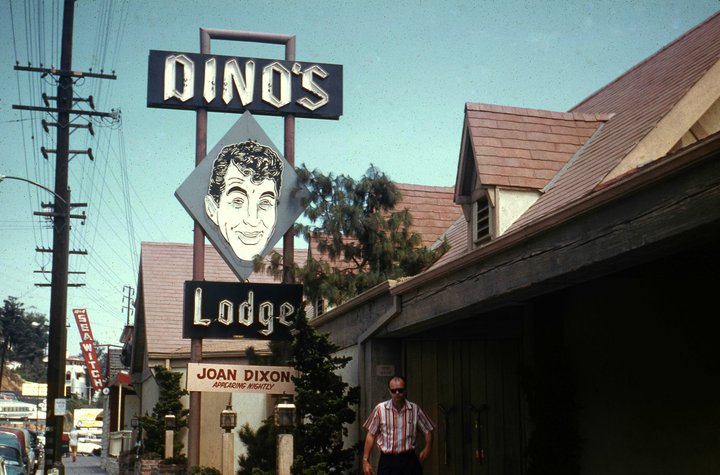 Remember the opening to 77 Sunset Strip? And that big happy face smilin’ down on you? That was Dean Martin’s restaurant located at 8524 Sunset Boulevard. For 27 years this neon sign of Dean Martin was one of Hollywood’s campiest icons. Serving home-style Italian food and grilled entrees in a wood-paneled atmosphere meant to replicate the great roue’s den. But by the early seventies, this restaurant that had once hosted parties for Frank Sinatra descended into a tourist trap and was abandoned by its celebrity clientele.

Almost everybody wants to own a “joint”. Dean Martin was no exception! He had ‘Dino’s Lodge’ on the Sunset Strip (it was the backdrop of that great TV show “77 Sunset Strip” during the 50’s. He had ‘Deans’ in Miami. And, after the boys flew the coop, leaving their roost at the Sands. He had a small cabaret type club at the Riveria Hotel simply called ‘Dinos Den’. What I have been lucky enough to get my hands on is a rare ashtray and matchbooks that hang out on my bar.