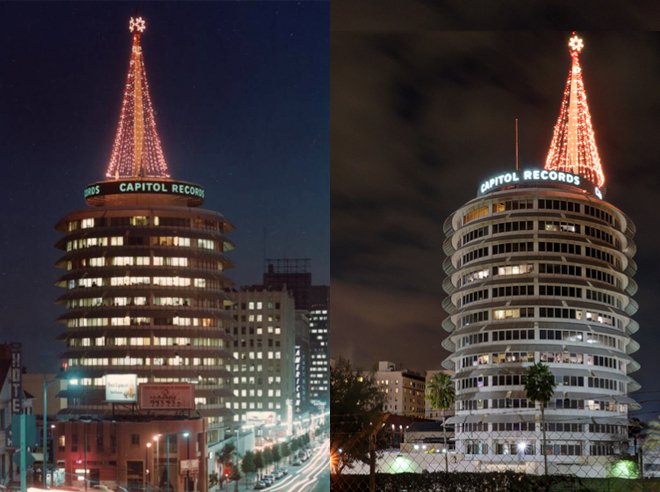 If there’s one holiday tradition that I enjoy every year, it’s spotting the historic Christmas tree that tops the iconic Capitol Records building on Vine Street in Hollywood.

Designed by Ollsen Lighting and featuring 4,373 bulbs (at 25 watts each), the tree was the first of its kind, and it has been a part of the Hollywood skyline each December since 1958, save for 1973, when L.A. experienced an energy crisis. (According to the music company, the Capitol Records switch board lit up like a wild fire that year with calls from concerned Angelenos wanting to know if the tree would ever return.)

Of course, the seasonal greenery isn’t the building’s only topper. A blinking light spells out Hollywood in Morse code and has done so every night since the building was erected. In fact, Leila Morse, Samuel Morse’ granddaughter flipped the beacon switch! It’s only been altered on rare occasions, like in 1992 to honor Capitol’s 50th anniversary, when it spelled out Happy Birthday, and is proof some things in L.A. (rarely) change.

In recent years, the families of Nat King Cole and Frank Sinatra “flipped the switch” – and now it’s my turn to witness this historical event. That’s right! Capitol Records was kind of enough to invite me this Monday, November 23rd, to light the tree for the 57th time! My father, Al Martino was a recording artist on the label since the 1950s and I have always dreamed of viewing the lighting ceremony up close from the top of that magical building.

I hope you’ll catch this moment on your evening commute! And hopefully this Hollywood tradition will last another 57 years!

UPDATE! Once we got up to the roof, the staff of Capitol Records surprised me asked me if I would do the honor of actually flipping the switch! You can only imagine my excitement. Here is exactly how it happened…