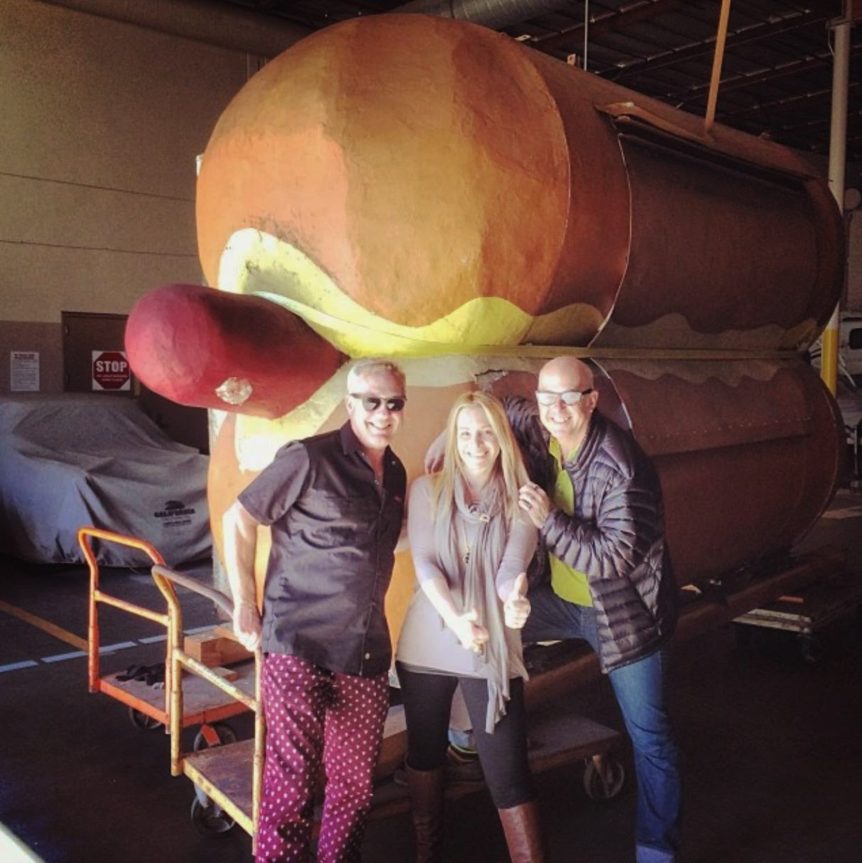 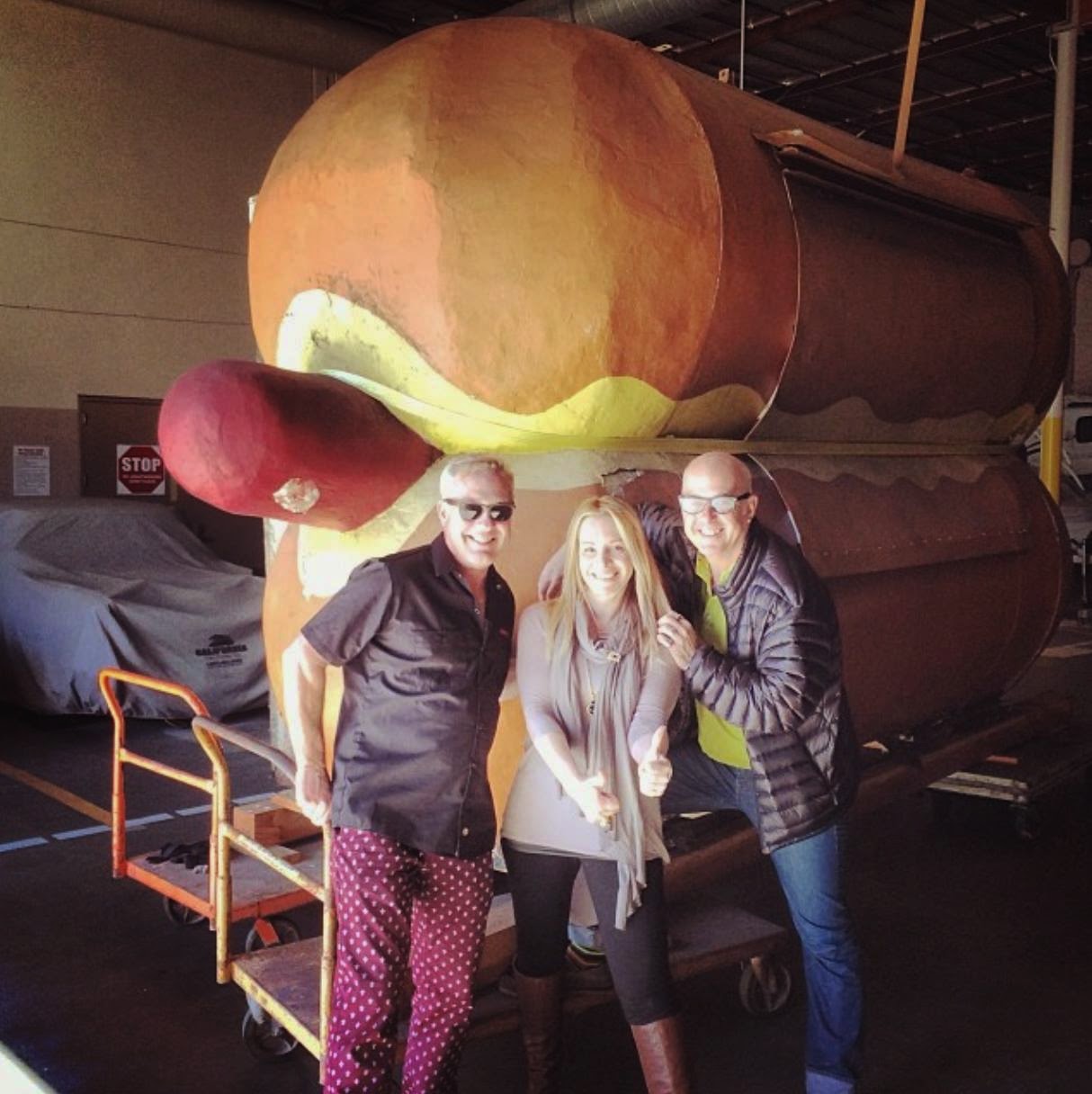 VLA’s debut features the beloved Los Angeles roadside eatery “Tail O’ The Pup” which mysteriously disappeared from the streets of West Hollywood nearly a decade ago. Its whereabouts have been in question ever since. Vintage Los Angeles uncovers the original hotdog façade that was built in the 1940s with its long-time owners The Blake Family in this exclusive mini-documentary, highlighting the colorful history and future of this lost Angeleno treasure. It’s an emotional episode since their son, Dennis Blake, passed away in his sleep last December. His wish was to get the pup back on the streets again and his family is going forward with his dream. We were there to capture its removal out of storage where it has languished since 2005. Thank you to The Ebersole Hughes Company for teaming up with VLA on this passionate new series. Each episode will offer a different tale. Most of them inspired by the stories we’ve been following on this page. This is one of the most rewarding projects I have ever been a part of and we dedicate this first episode to Dennis Blake. 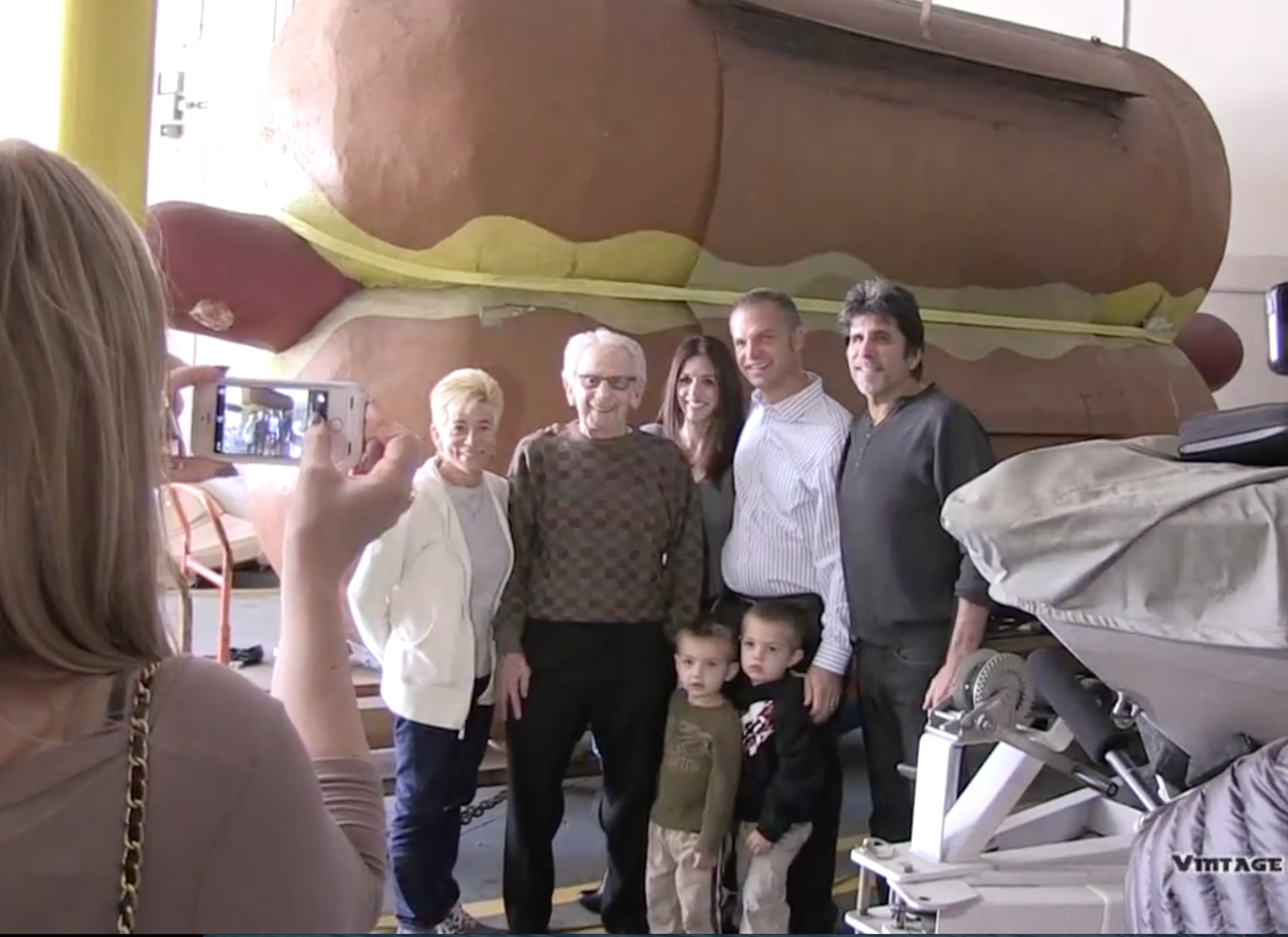 There is one personal story I must share. Last year I picked up Dennis from his home and we went to see the pup. He was heart broken to see it in storage. On the way back he gave me that vintage “Tail “o the Pup” pin you see in the video. I placed it in my glove compartment. Tragically six months later Dennis passed away unexpectedly. When we reached out to the family to shoot this in his honor, I arrived at the storage unit a bit early that day. I had nothing to do so I started cleaning out my car. And when I opened the glove compartment, there was the pin! I knew immediately it was a sign. I placed it on my scarf and when we started shooting, Dennis’s father Eddie Blake asked me, “Where did you get that?”. I said, “Dennis gave it to me”. Eddie swelled up in tears while our camera’s were rolling. There is no question in my mind that was Dennis making an appearance in this beautiful segment. 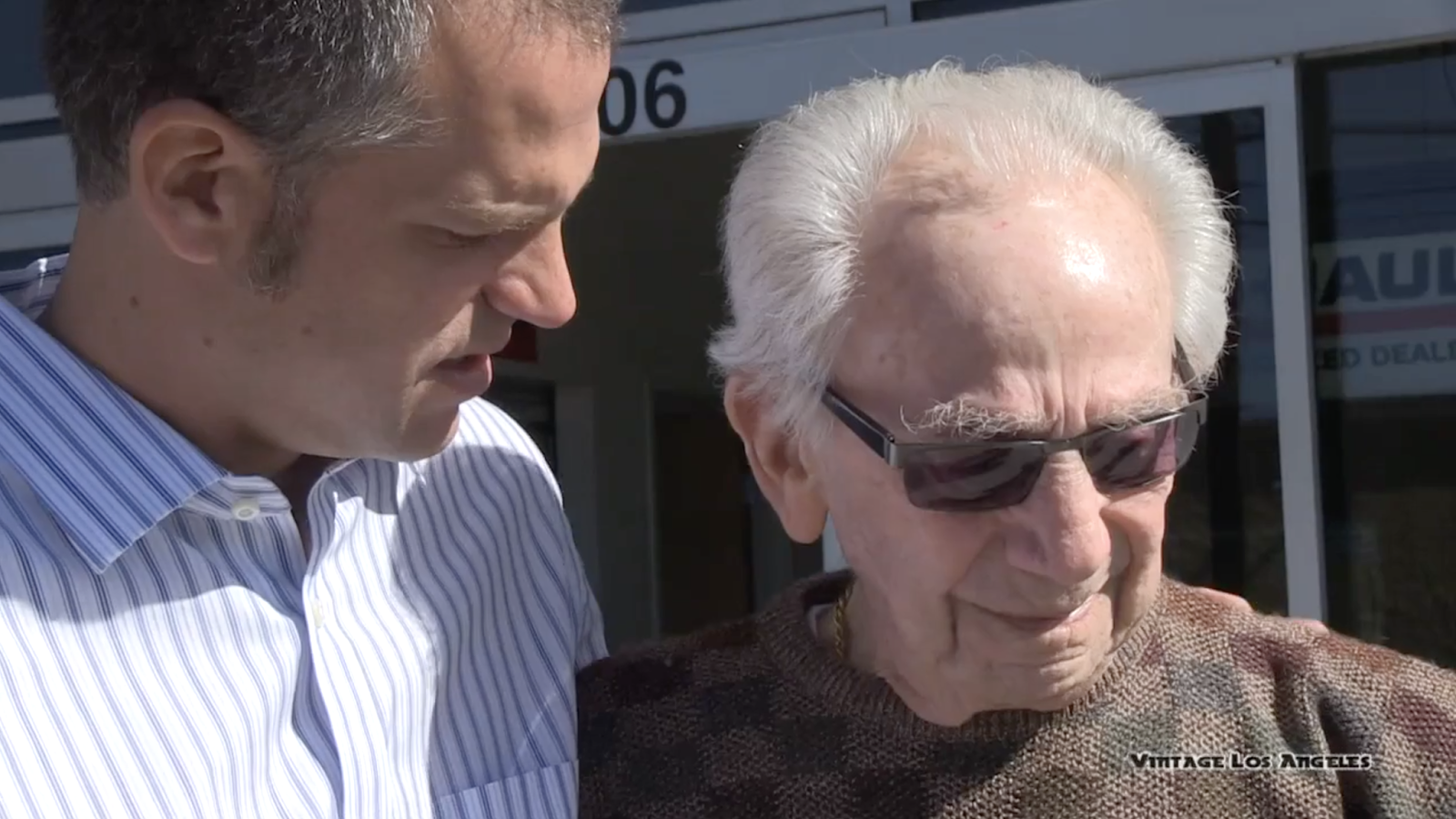 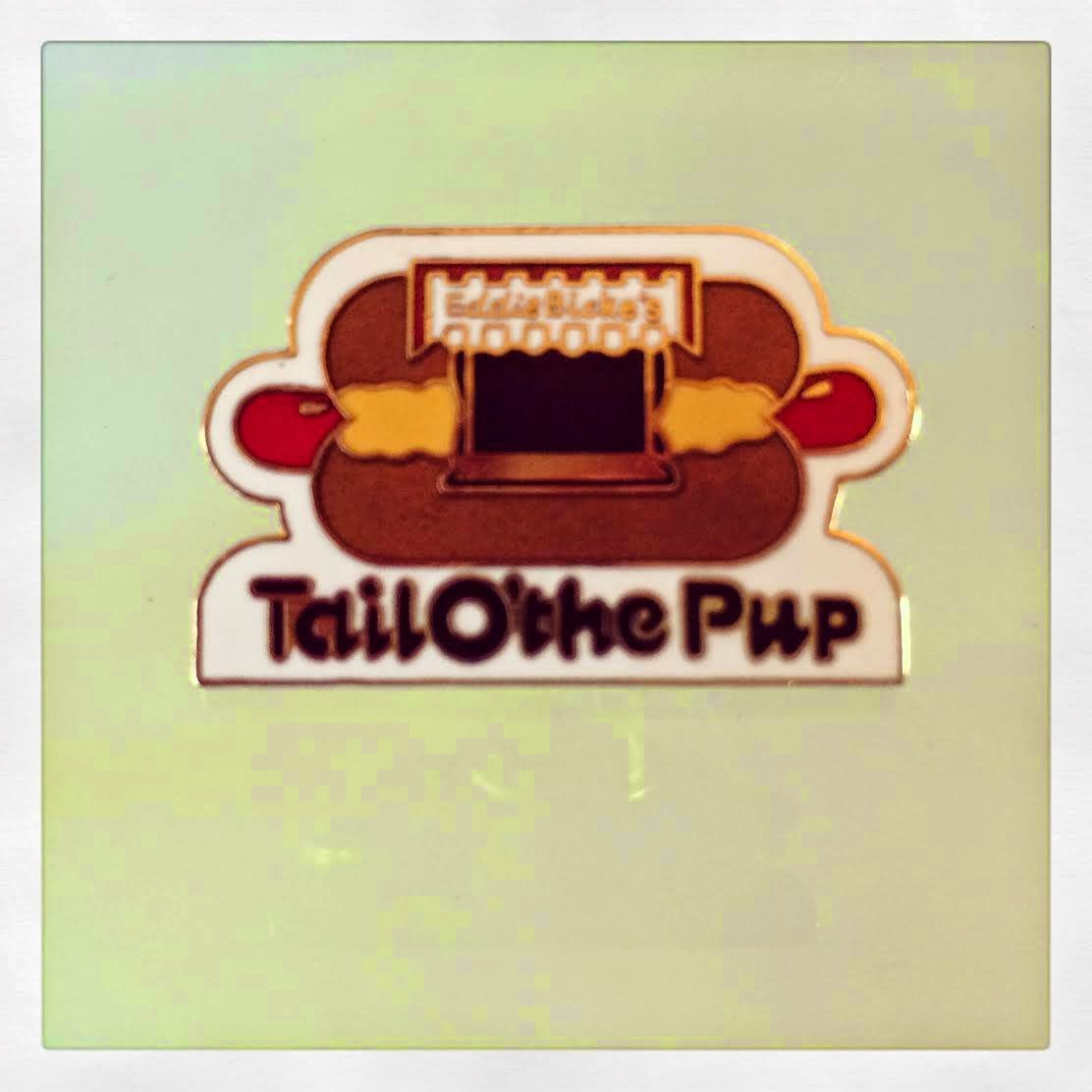 Vintage Los Angeles will be shooting many more segments within the year. Every story will be generated out of the VLA page. We will also be shooting segments with various celebrities that have an LA connection. Belinda Carlisle, Micky Dolenz and Frankie Avalon have already signed on for future episodes as well as a 95 year old lady who contacted me via Vintage Los Angeles who opened the Villa Nova on Sunset Strip. This is where Marilyn Monroe met Joe DiMaggio. Today it’sThe Rainbow Bar and Grill. A.J. Benza from “Mysteries & Scandals” will also hosting a few segments!

So far our first series been highly received and has been featured in WeHoVille and Curbed LA!

Your support is immeasurable! This is really more then just a facade in storage. It’s a piece on something that is specific and tangible, a family’s heartfelt story. So even though it’s “just” a very small and one-off funky old and beat-up thing, there’s much more to it as you can see. It’s more then just an L.A. icon. We actually never expected Eddie Blake to show up on the day of filming. It was just one of those unscripted moments in life.

We will be premiering 2 more episodes in the next couple months! Then we will most likely need to shop the series around or crowd fund since we will need funding to keep this up!! So please spread the word! The more buzz, the better for the VLA web series which we are funding ourselves at the moment.

We will be keeping you all up to date on where the Tail ‘o the Pup will land after its restoration! We think we know where it’s going and VLA is behind the the new location! Stay Tuned! 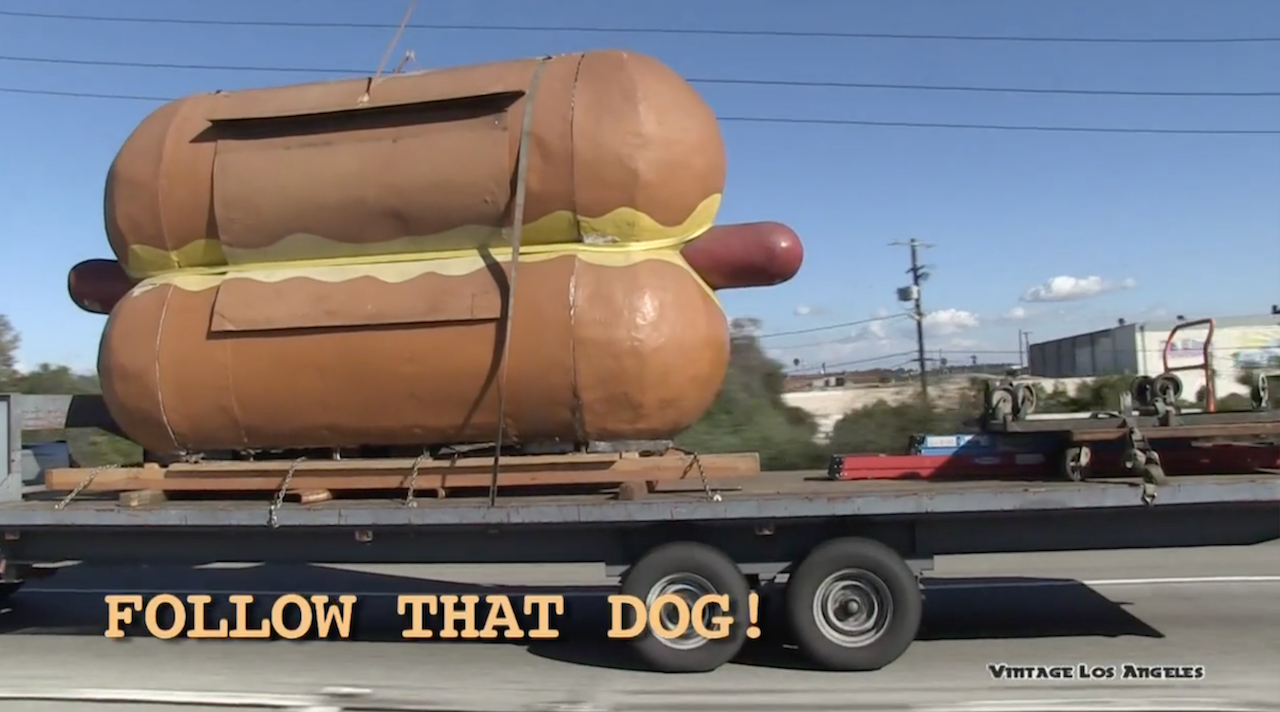