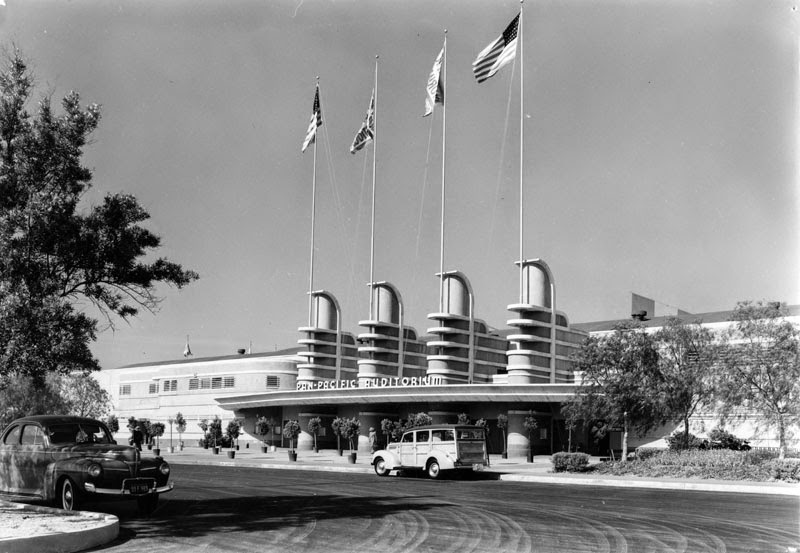 The venue that hosted Elvis and the Ice Capades was demolished in 1992. For Alison Martino, the loss was personal. 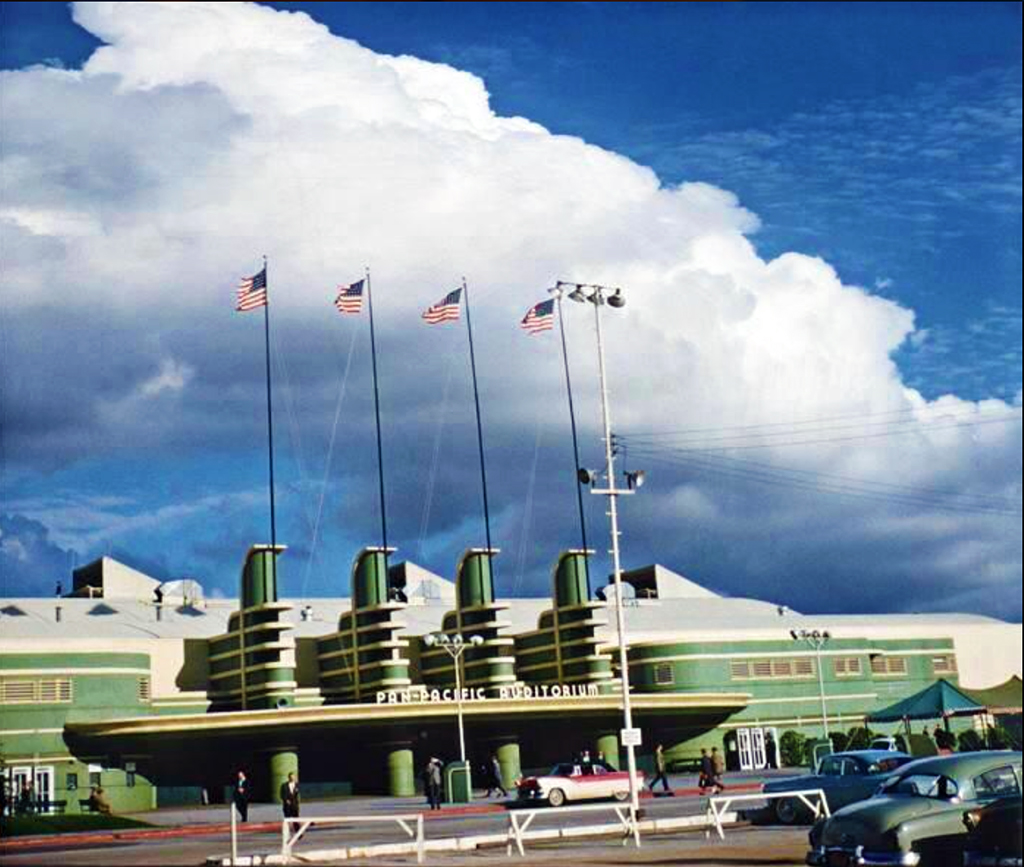 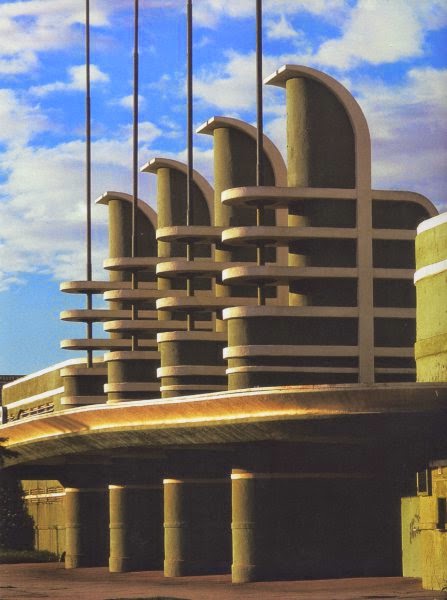 The 100,000-square-foot masterpiece was used as a sports arena, for political events, car shows, circuses, conventions, and concerts. Elvis Presley performed there at the height of his career, in October of 1957. The King of Rock ‘n Roll was so determined to win over his celebrity-studded audience that he played 19 songs in front of 9,000 lucky guests, and closed with an encore of “Hound Dog.” 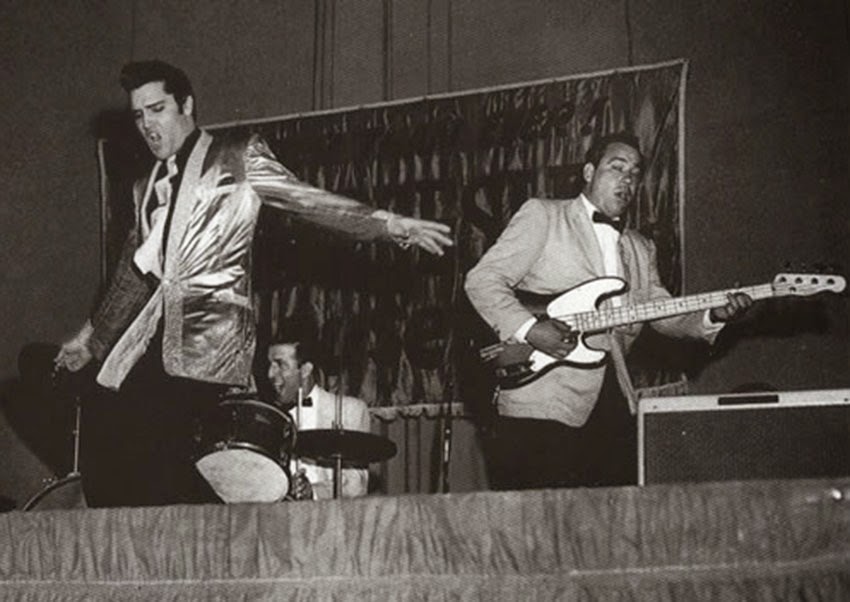 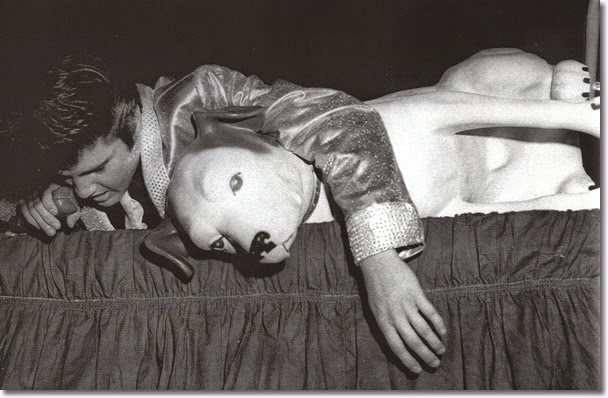 Elvis grabbing RCA’s Mascot Nipper around the neck with is left arm and lifted him to the floor while continuing to sing into the microphone.

“Queen for a Day” also broadcasted from the venue, and it once housed the largest ice rink in the world. The auditorium held the Ice Capades and the annual Motorama car show, where a futuristic looking car key was once given out as a souvenir. Pan-Pacific is also where Dwight Eisenhower spoke to an audience of 10,000 just one month before he was elected President of the United States 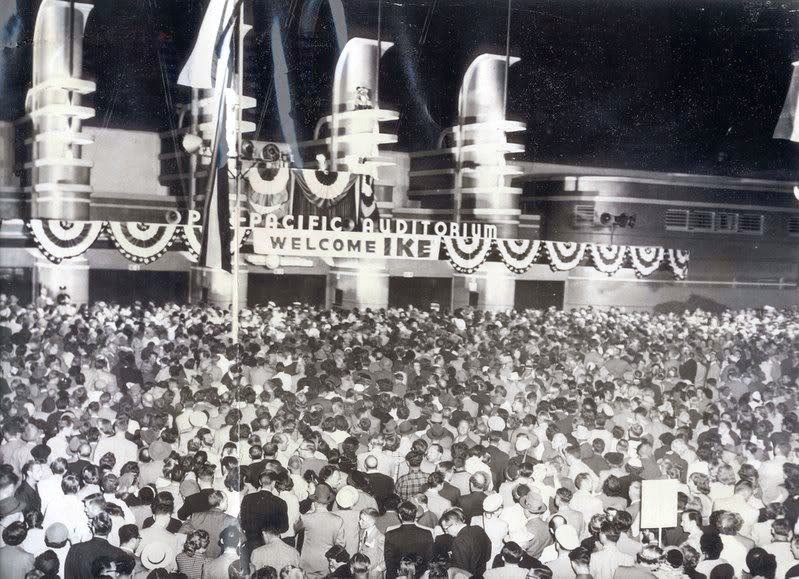 A massive crowd entering the Pan Pacific Auditorium to hear General Dwight D. Eisenhower speak to a crowd of 10000. 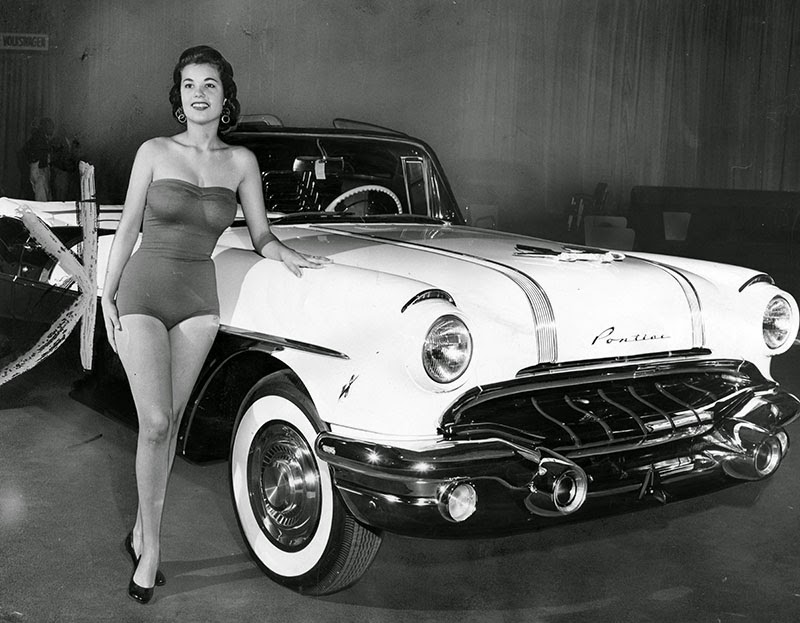 Photograph caption dated December 2, 1955 reads, “Nancy Young and a Pontiac combined to make this picture of beauty. The show will continue through Dec. 10, from 10 a.m. to 11 p.m. each day. Special entertainment is offered nightly by Spike Jones and his ‘City Slickers’.

A historic film of the “Ice Follies of 1948” premiering at the Pan Pacific Auditorium in Los Angeles, California. Film features the Scotvold Twins, Joanne and Joyce and the Schramm Twins, Roy and Ray who skate chained together. Also featured is Phyllis Legg and Harris Legg performing their stilt-skating act.

The stunning two images below were recently posted on Vintage Los Angeles . This Kadocrome slides shows the Pan Pacific painted brown and not it’s signature green it’s been known for which leads me to believe this was the original color it was intended to be. Most of the photos I’ve researched over the the years have been Black & White. So this was a very exciting discovery. 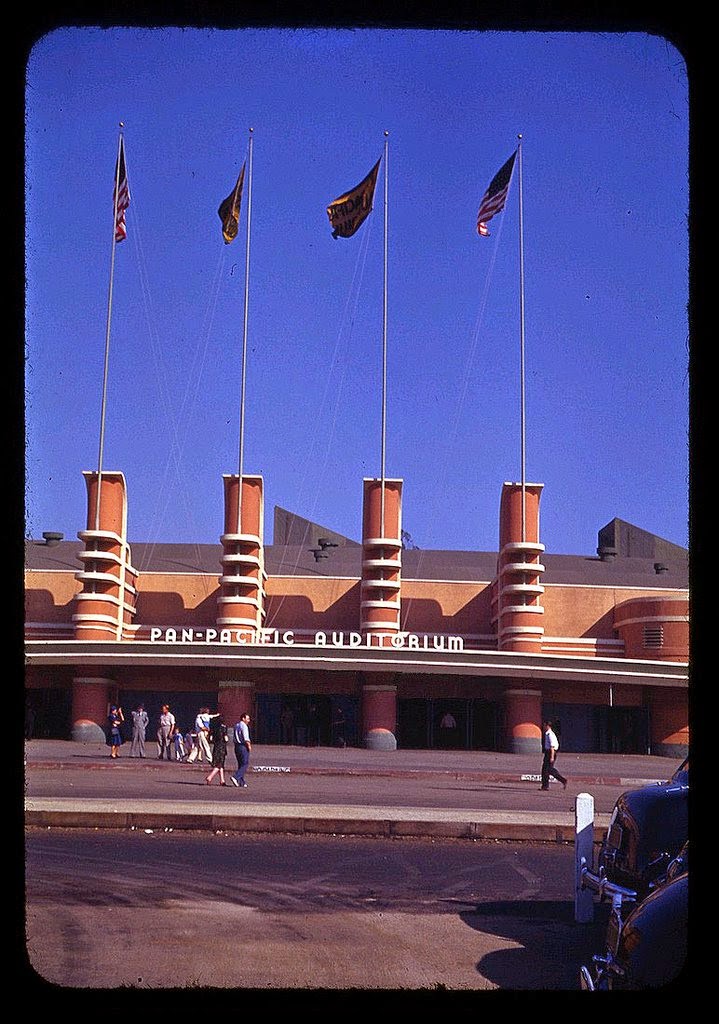 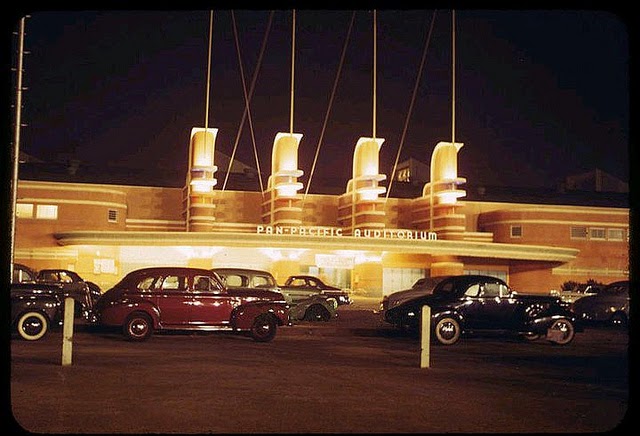 Jayne Mansfield at the Pan Pacific auditorium in a 1954 Buick Wildcat . 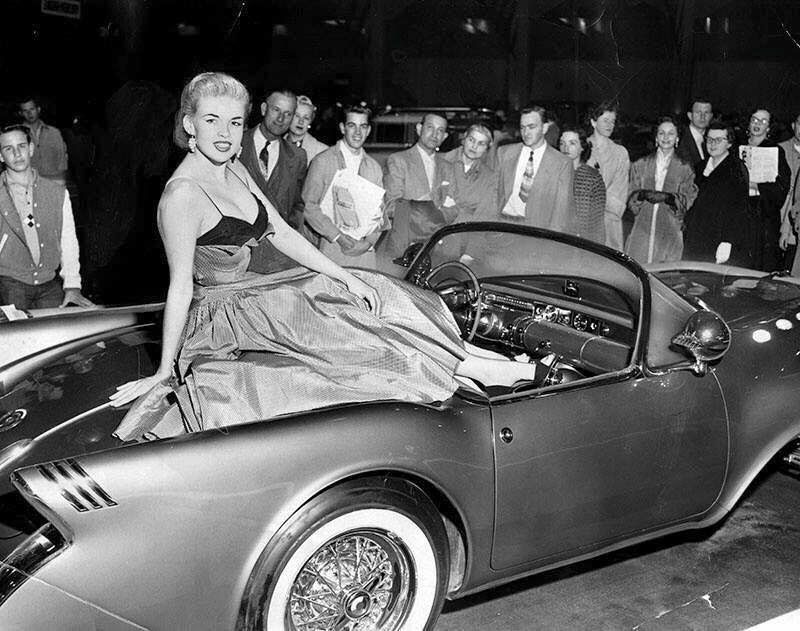 This 1957 image shows the Pan Pacific Auditorium, once located near the CBS Television studios and the current site of the Grove Shopping Center. 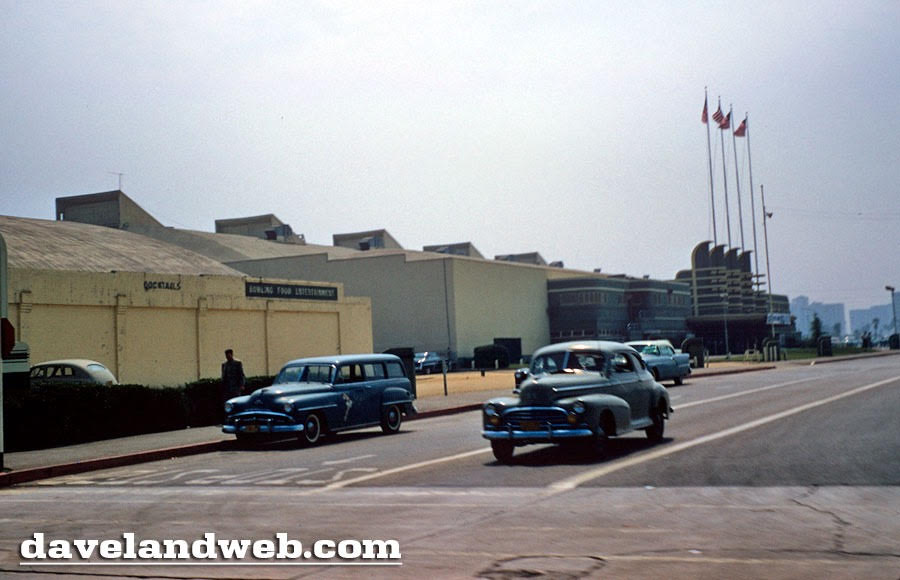 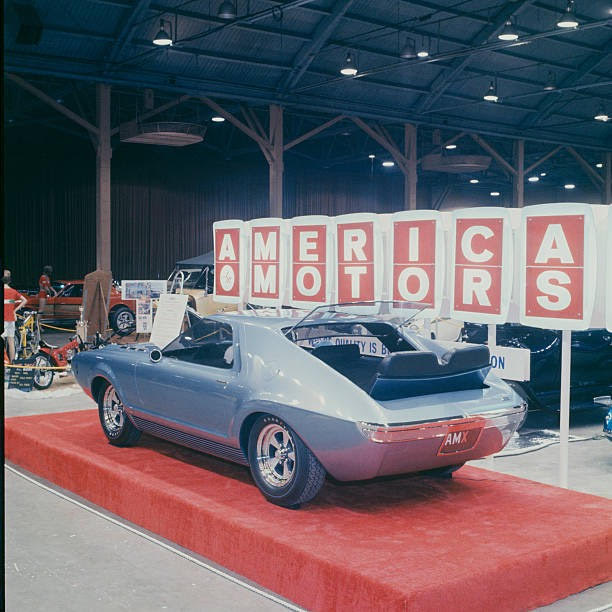 Pan-Pacific Auditorium Cafe. Los Angeles Historic-Cultural Monument No. 183, designed by Plummer, Wurdeman, and Becket in 1935, demolished in 1992 following the 1989 fire. 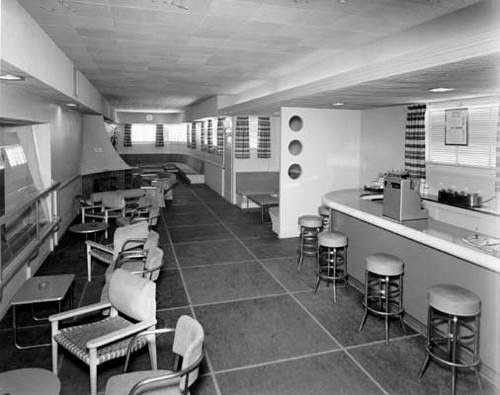 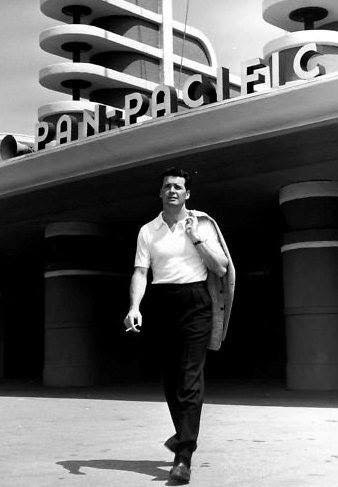 When the Los Angeles Convention Center opened in 1972, the Pan-Pacific Auditorium closed. Despite being added to the National Register of Historic Places., the venue was neglected and suffered damage during the years that followed and covered in graffiti. 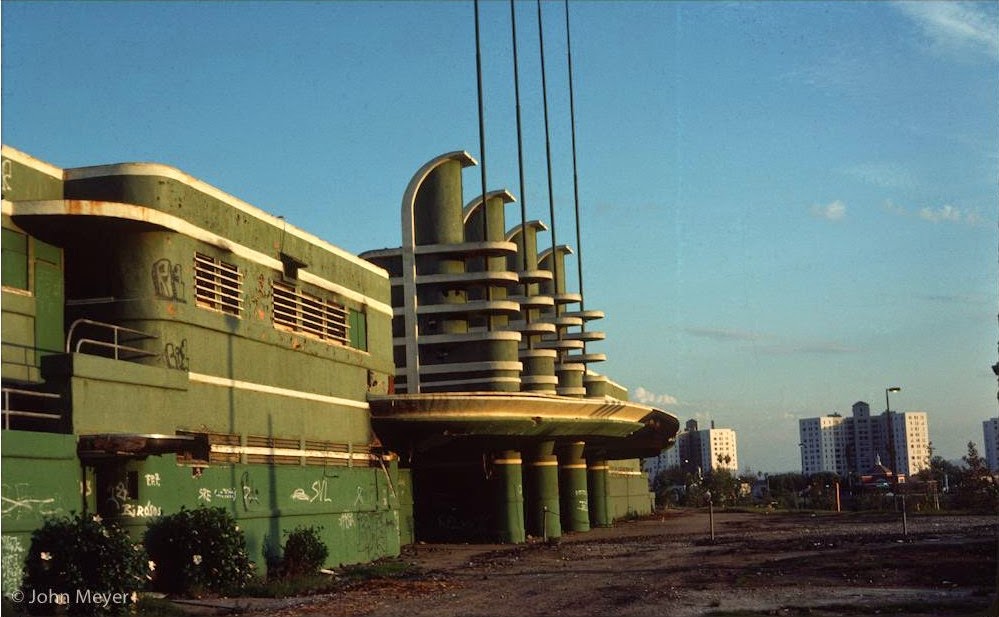 Thankfully it is preserved on celluloid thanks to the 1980 film Xanadu. I remember roller skating in front of the Pan-Pacific at 10 years old; with a recording of Olivia Newton John playing on my Sony Walkman, I fantasized I was about to perform inside.

This was the album cover painted in the movie Xanadu of Olivia Newton John by the character of Sonny Malone, played by Michael Beck. 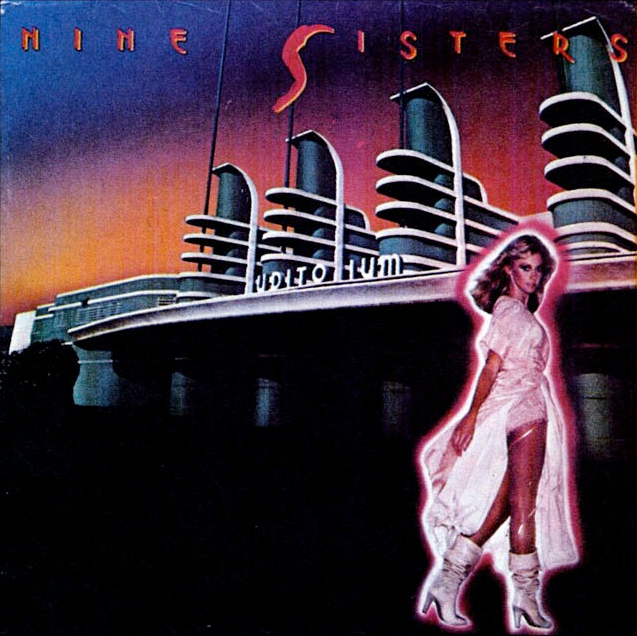 Then, in 1989, I watched alongside other Angelenos as my favorite building in Los Angeles went up in flames. The fire was visible for miles. I remember seeing a cloud of black smoke as far as Century City. I raced to the auditorium to see what was happening and when I got there I realized I would be forced to say goodbye to my old friend. It was pitiful seeing the terribly charred structure before it was demolished three years later, in 1992. By that time it had become a shell of its former self, humiliated by graffiti and decay. Too bad it never got its happy Xanadu ending in real life. 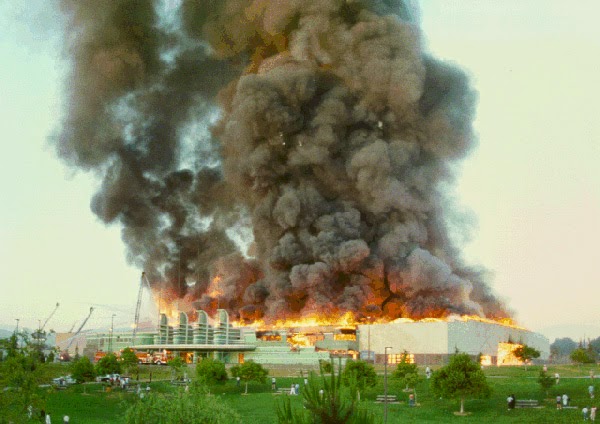 Today you can see a recreation of the Pan-Pacific Auditorium at Disney’s California Adventure theme park. 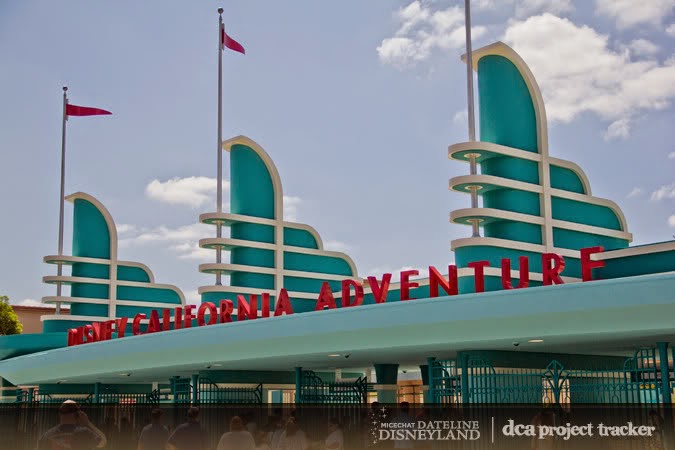 There is also a smaller recreation of it featuring one single art deco arch in its original location at Pan Pacific Park, a place that makes me feel melancholy and nostalgic every time I pass it. Some lost loves are harder that others to get over. 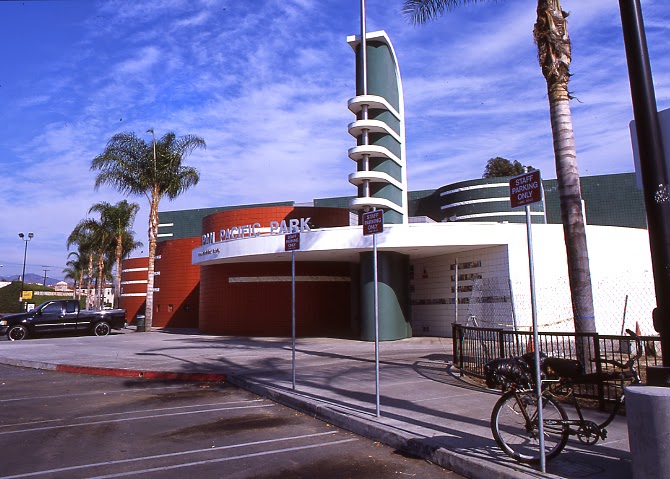 “The Babys” at the Pan Pacific Auditorium!

“Fish Heads” by Barnes&Barnes. This classic video was directed by Bill Paxton. This full version also has the Pan-Pacific Auditorium in the intro! Bill Paxton is also featured in the video.

Portions of this article originally appeared in Los Angeles Magazine.