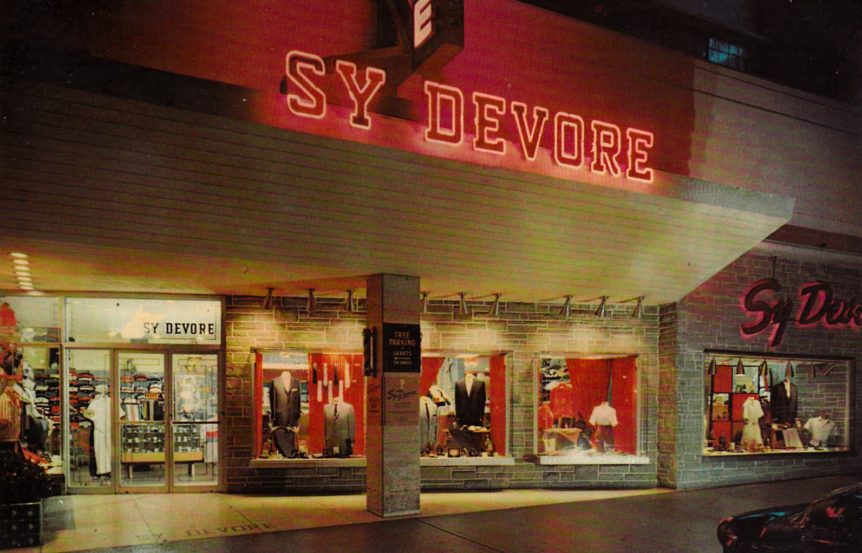 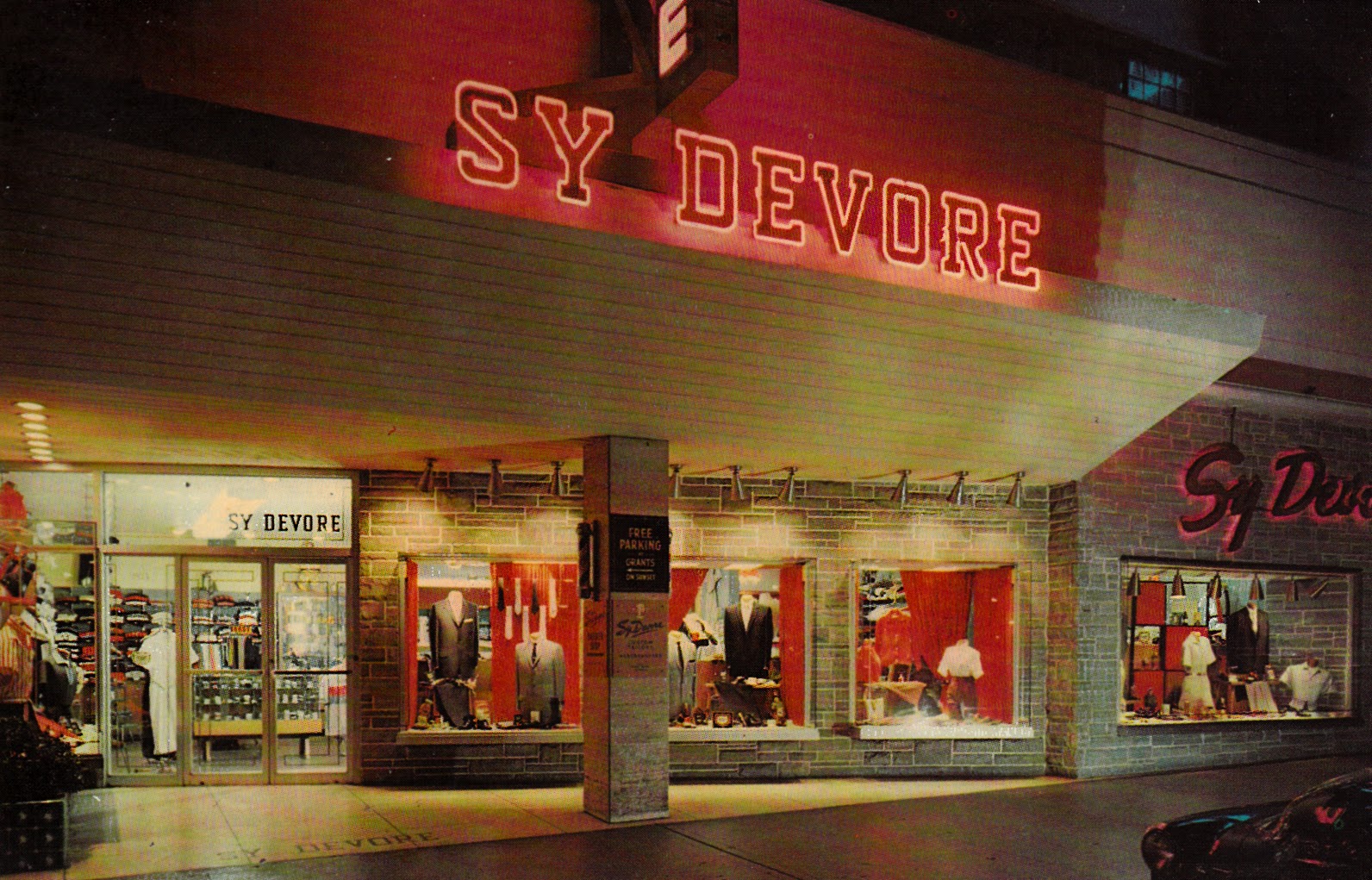 In 1944, a tailor named Sy Devore moved to Los Angeles from New York to open a 900-square-foot shop at the glamorous intersection of Sunset Boulevard and Vine Street, in Hollywood. The shop, which sold handmade custom suits, was next to Wallichs Music City and down the street from the world-famous Brown Derby restaurant. 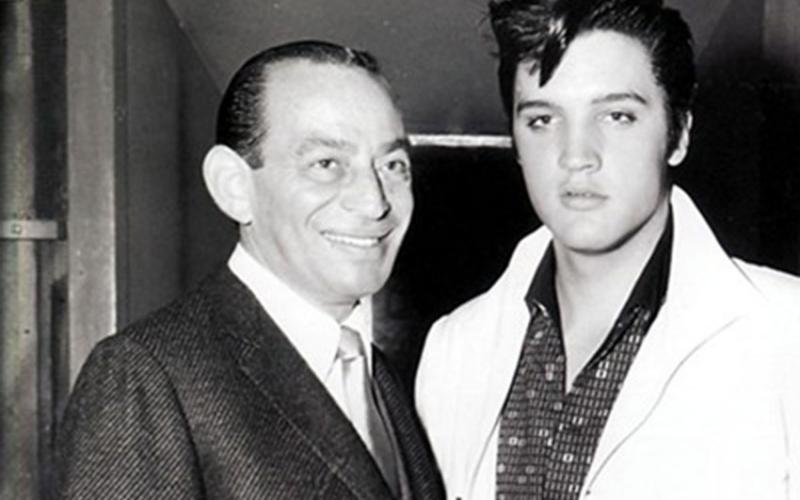 Devore’s threads made those cats the epitome of 1960s cool. There were sharkskin suits lined in paisley silk, sports coats, pastel sweaters, skinny ties, dress shirts, and trousers with big belt loops, all finished with an impeccable fit.

According to Devore’s niece, Marti, jazz legend Ella Fitzgerald once purchased Devore’s private label V-neck sweaters in every color and gave them to the Count Basie Orchestra players as Christmas gifts; Elvis Presley shopped at Devore’s off the rack, picking out 20 suits at a time at $350 a pop; and comedian Jerry Lewis showed up on weekends to buy the shop’s sought-after alpaca sweaters. Devore’s is also where Sammy Davis Jr. discovered his hip signature Nehru jackets. Soon, the musician had a jacket collection so flamboyant, it would impress Liberace. By the late ’50s, Devore was so well known that Bob Hope made the famous haberdasher the brunt of a joke. “In a very good year,” he said, “I have my choice between a Rolls-Royce, a new house in Beverly Hills, or a suit from Sy Devore.” 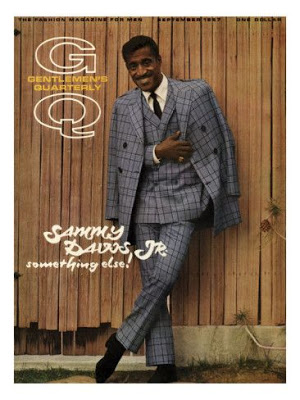 When the Rat Pack starred in the original Ocean’s 11 film in 1960, it was Devore who designed their close-cut suits. Later, the tailor created and sold a high-collared, fine cotton shirt called the Dean Martin. It cost $8 and was so popular it was shipped around the world. Devore also made a custom shirt for Jerry Lewis, but that exact design was never duplicated for anyone else. (He costumed Lewis-helmed films including The Disorderly Orderly and The Geisha Boy.) 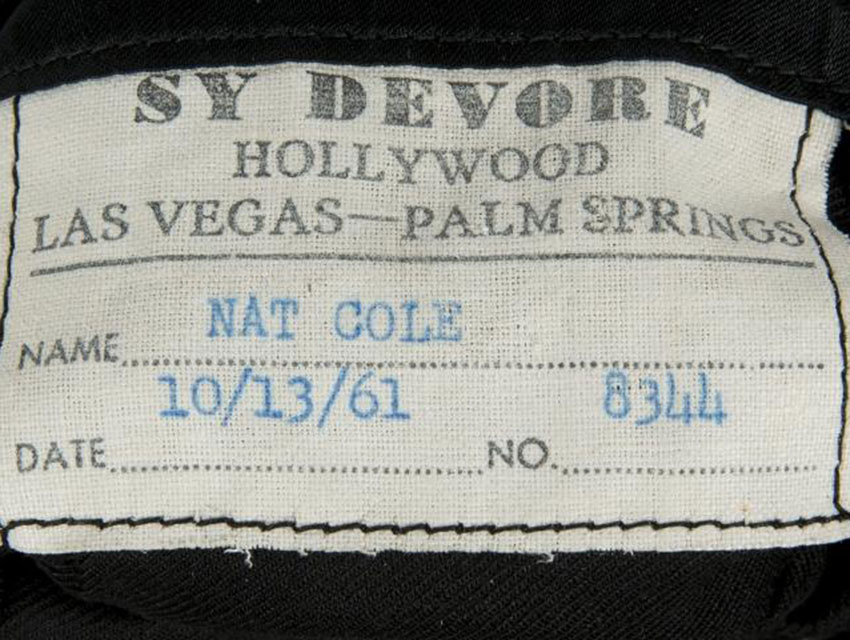 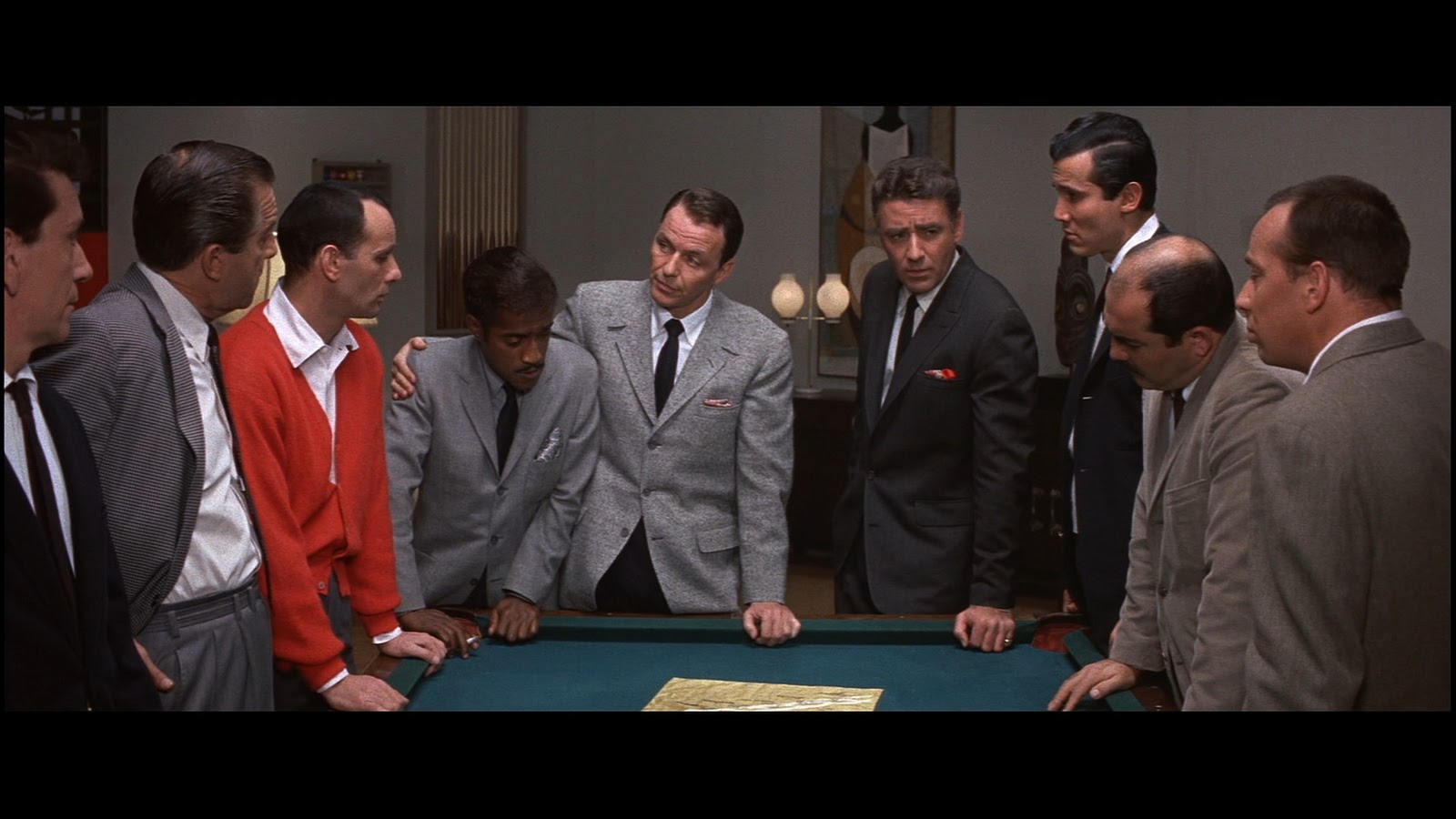 When the Martini-gulping Rebel Rousers started to play Las Vegas, they convinced Devore to open a second outpost in the now defunct Sands Hotel and Casino. He opened a third store in Palm Springs, where showbiz stars also had homes, in 1958. By the time he opened his fourth store, in Sherman Oaks’ Fashion Square Mall in 1962, Sy had grossed more than $1 million in sales.
It was reported that Jerry Lewis’ annual bill at Devore’s in Hollywood was in the vicinity of $100,000 in the early 1960s. 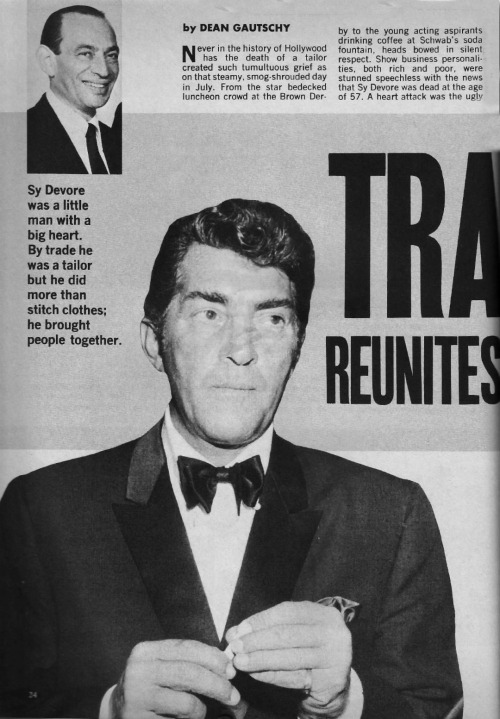 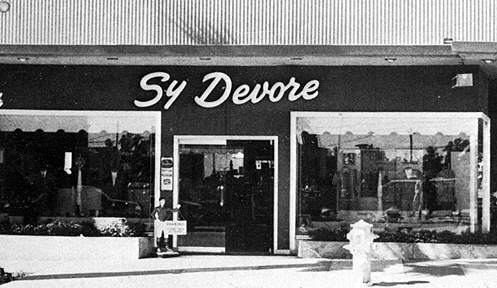 This is a rare pic of Frank Sinatra in 1963 on the Paramount backlot during the making of “Come Blow Your Horn.” As you can see in the picture, one of the exterior sets they designed was a Sy Devore storefront requested by Sinatra himself. 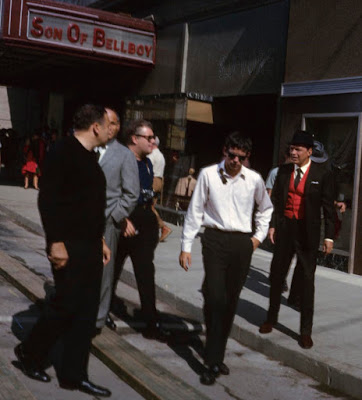 My father, singer Al Martino, also shopped for stage clothes at Devore’s. Marti would occasionally drop off Dad’s newly tailored tuxedos and ruffled shirts in custom garment bags at our house, then do the same for Jimmy Durante or Milton Berle. When Dad needed a few new casual suede jackets, he did not think twice about where to go. All requests—like when Dad and Glen Campbell ordered the same cowboy jackets together in five colors in 1969—went to his favorite tailor. Going with my dad to Devore’s shop and watching him get fitted is one of my earliest memories. 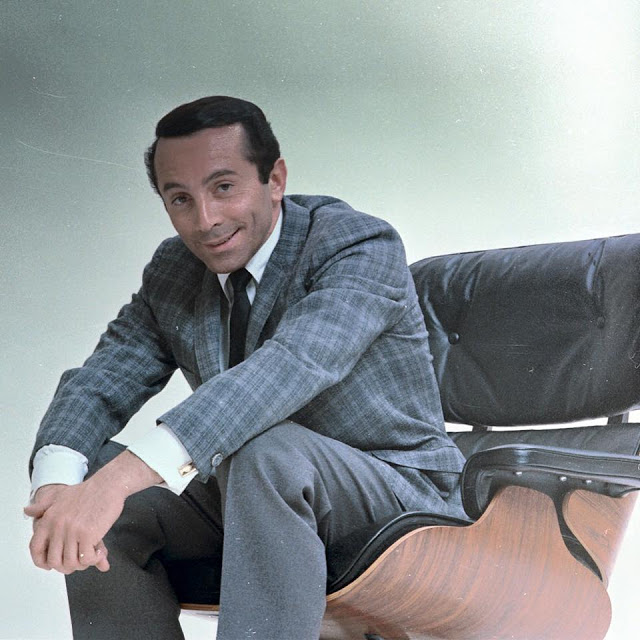 After the tailor passed away from a heart attack at age 57 in 1966, his family kept the business going. In fact, Sy Devore is still in business today; the company’s only shop is on Ventura Boulevard in Studio City. There you can see autographed endorsements from Nat King Cole, Elvis Presley, and Sammy Davis Jr. that once hung in the Hollywood location.

The 15-year-old Studio City store, which is owned by Danny Marsh, continues to deliver excellence in tailoring and has kept Devore’s legacy alive by working with celebrities and costume designers as well as designing Sy Devore label suits, shirts, and sweaters for everyday customers. So you can still pick out something swanky to celebrate Frank Sinatra’s 100 birthday this December. 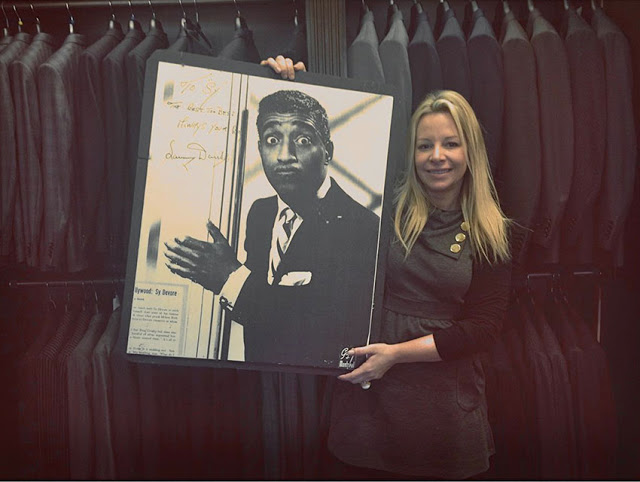 The following are a few of my Sy Devore collectibles: 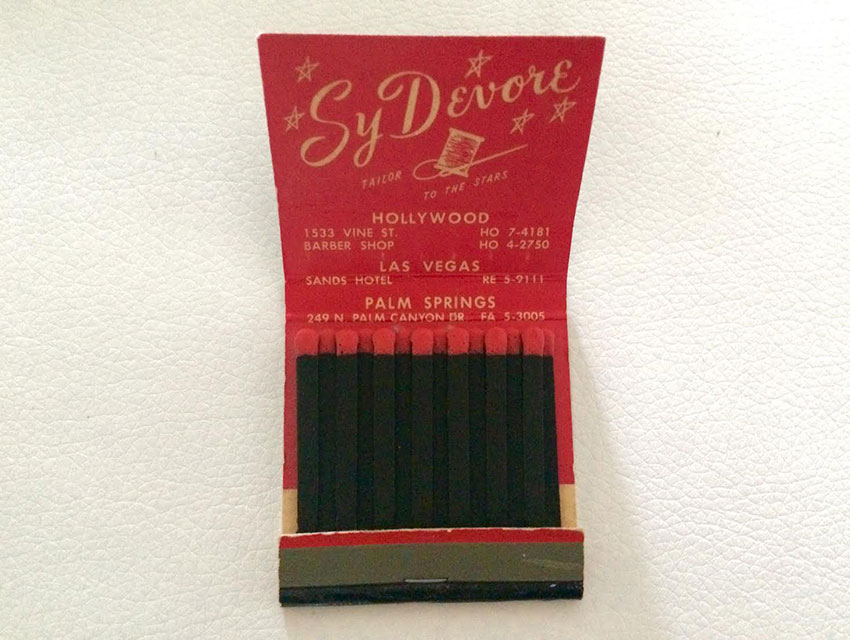 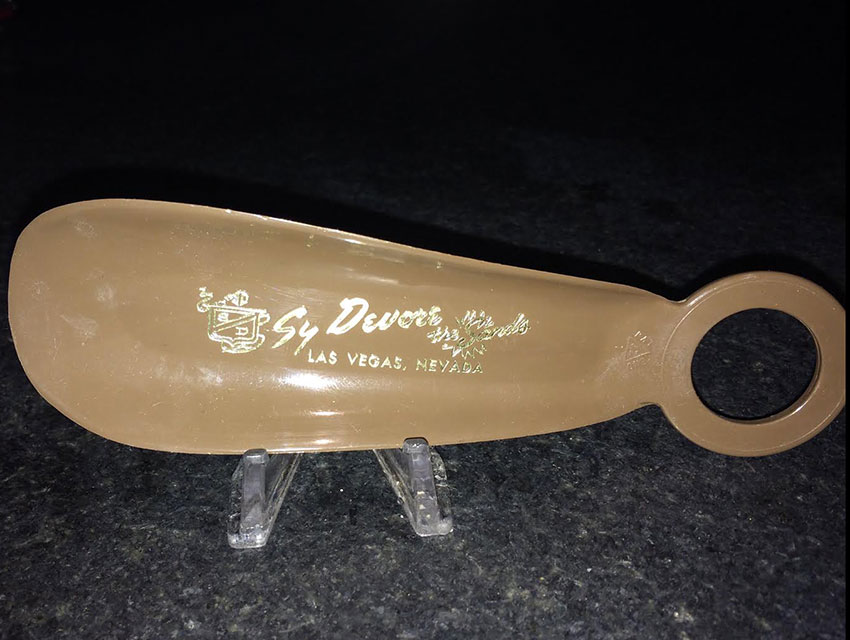 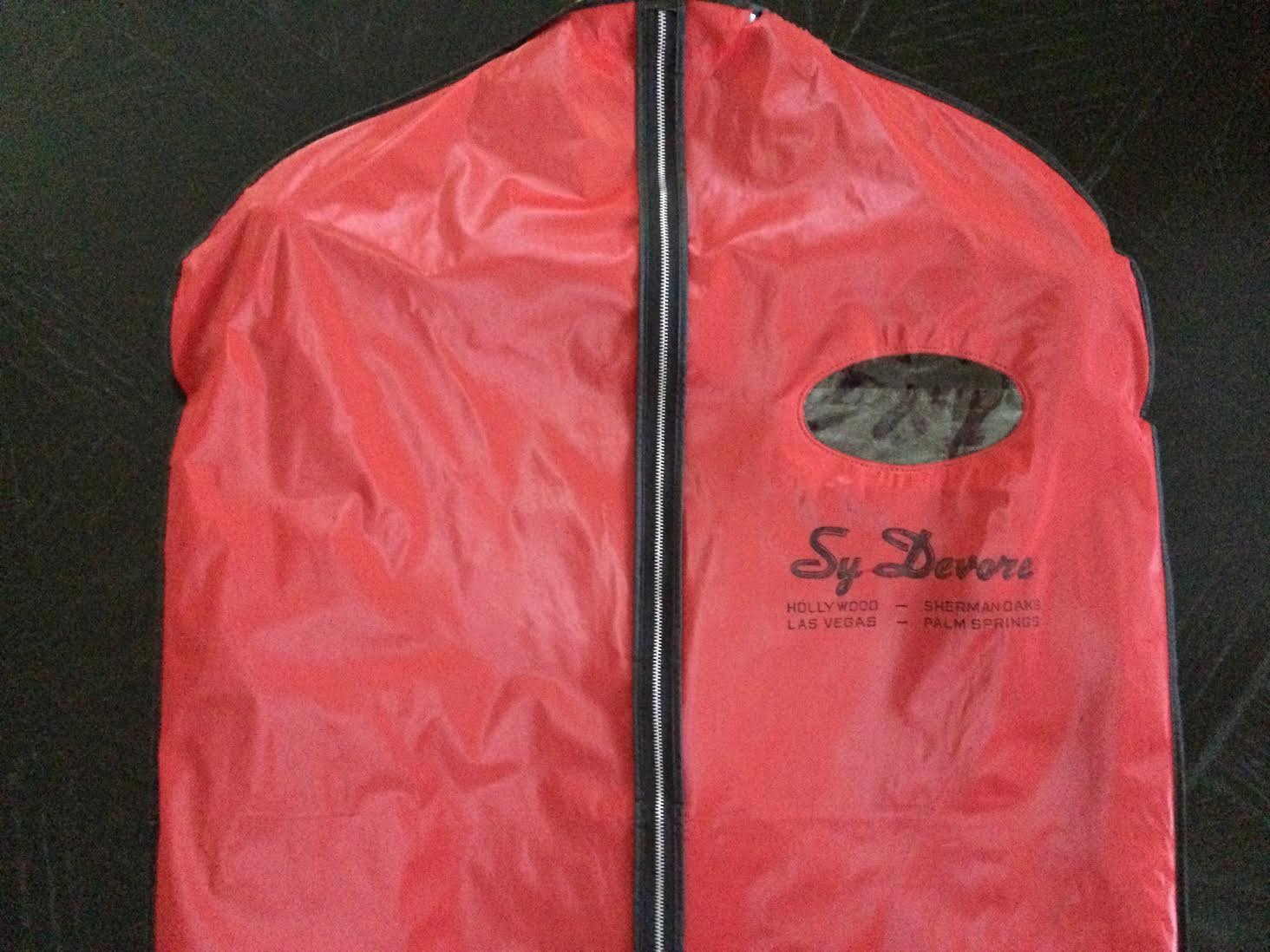 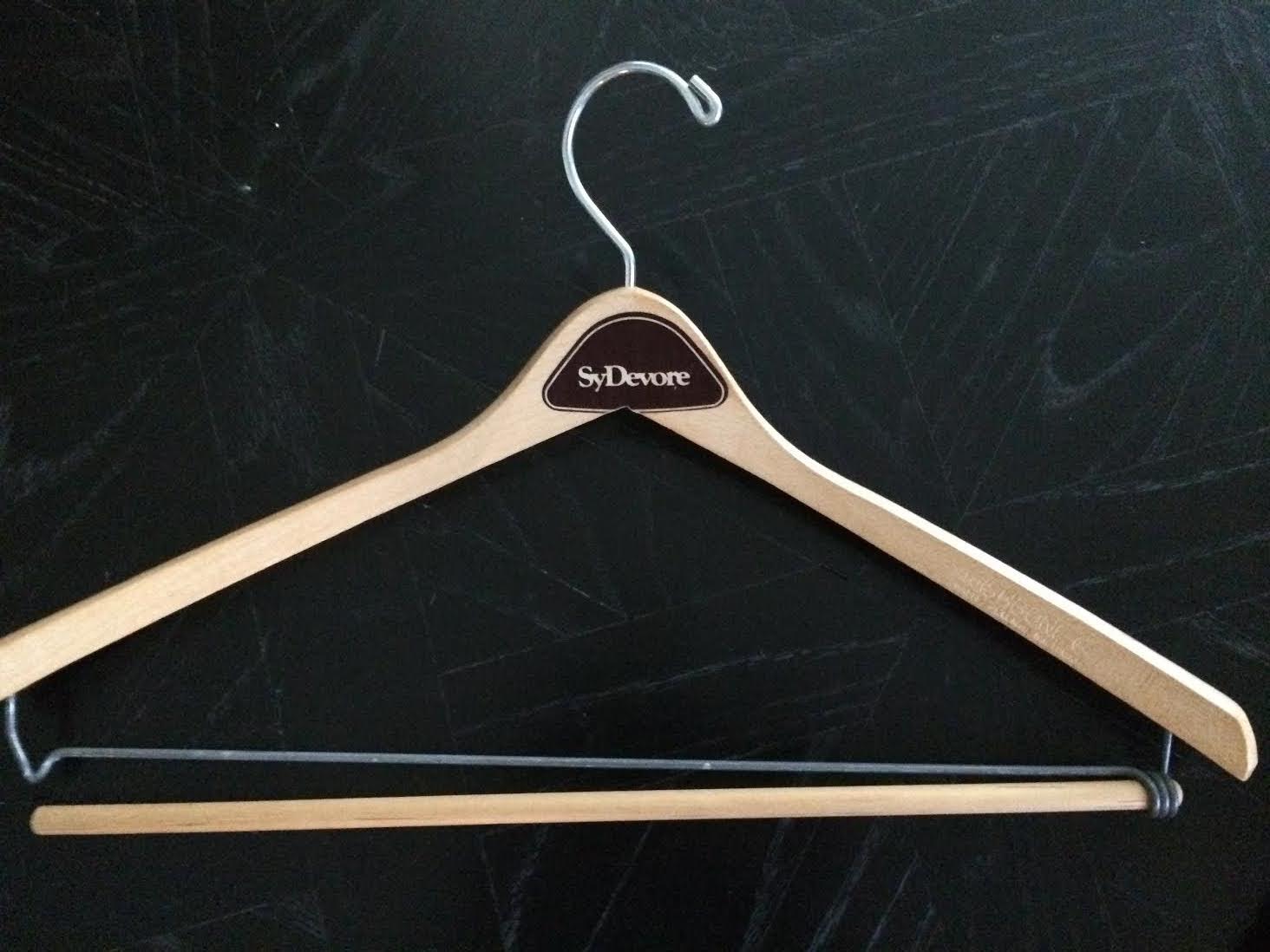 Portions of this article originally appeared in
Los Angeles Magazine.