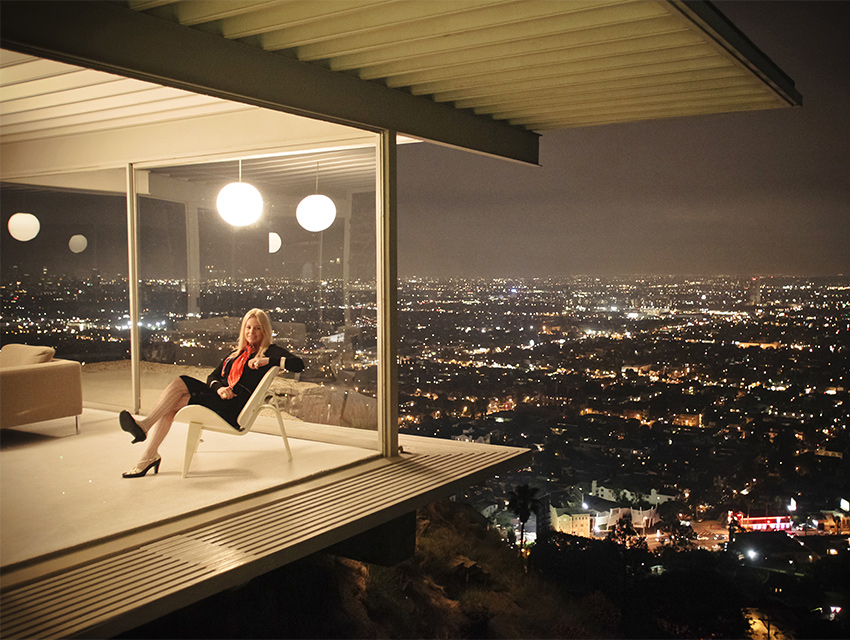 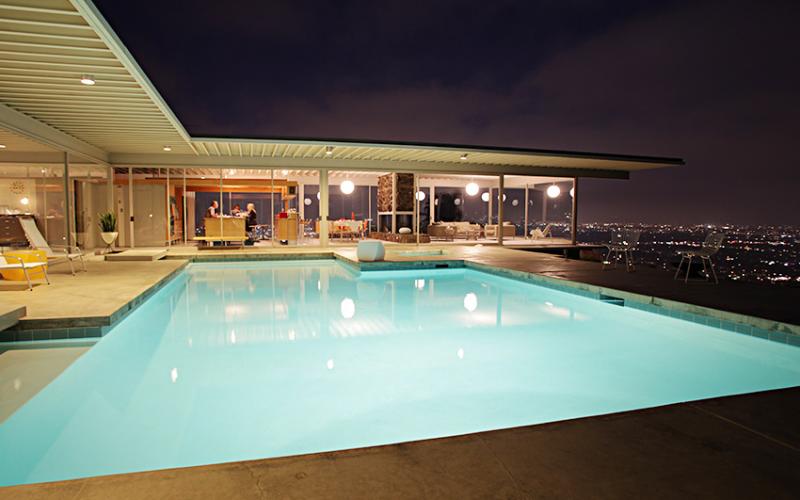 Bruce and Shari Stahl on living in the most famous midcentury modern home in the world.

Unless Credited, All Photos by Donavan Freberg

I’ve been fortunate enough to meet many legends and visit many astonishing homes, but nothing thrills me more than a trip to L.A.’s iconic Stahl House. The structure may be more famous for its breathtaking view of the Sunset Strip, its immaculate midcentury design, and its oft-photographed pool, which is perched on the edge of a cliff, but I love it for another reason, too: It’s living history.

I’ve always longed for a time machine that could take me back to when L.A.’s long-gone theme parks, drive-ins, and roller rinks were still around. So many of the buildings I admired growing up have been drastically transformed. The city around the Stahl House has changed, but the house itself has not. 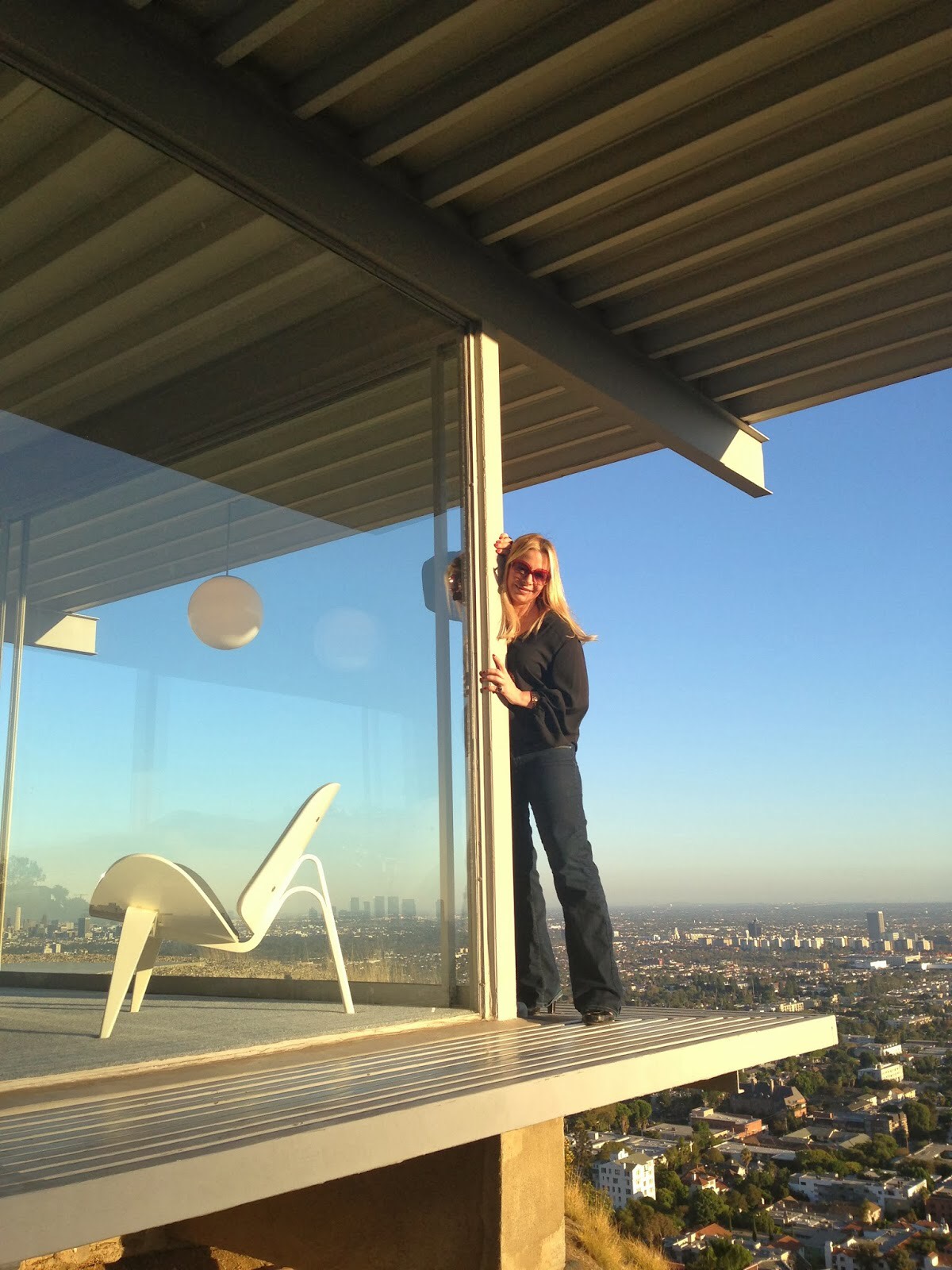 Clarence “Buck” Stahl had the original idea for the home. After purchasing the lot on which it sits for $13,000 in 1954, he began, along with his wife, Carlotta, to search for the perfect architect to realize his vision. More than one architect the Stahls met with insisted their dream could not be executed. Pierre Koenig disagreed. The young, energetic architect took on the project in 1959.

Today, the home is known as Case Study House #22. That’s because it became the 22nd of 27 homes to be a part of Arts & Architecture’s famous Case Study series, which commissioned emerging modernist architecture in Southern California. Homes designed by Raphael Soriano, Charles Eames, Craig Ellwood, Richard Neutra, and Eero Saarinen were also part of the project, but the Stahl House has become the most recognizable of the Case Study houses. It embodied the home of the future. 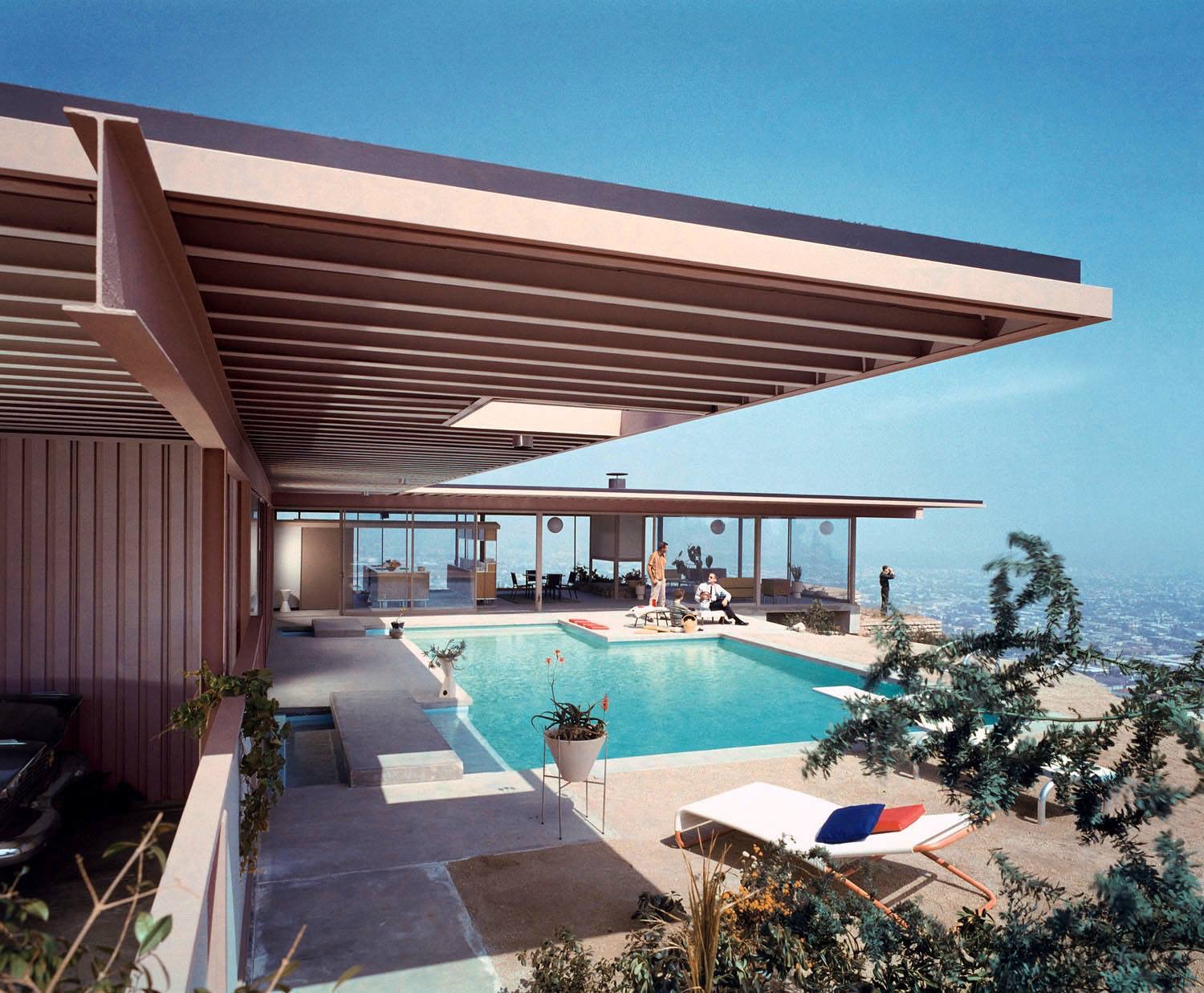 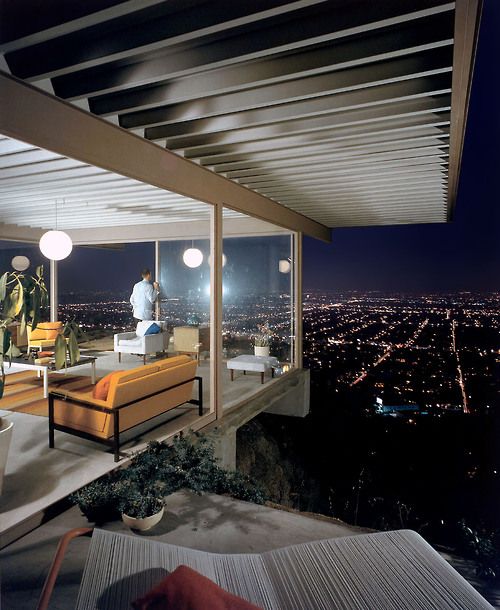 The Stahl House is one of the most photographed houses in the world.
Photo: Julius Shulman, 1960 (Getty Images)

Photographer Julius Shulman snapped his now iconic image of the Stahl House in 1960. I thought of the picture the first time I stepped inside the home; realizing I was in the exact spot Shulman photographed nearly brought me to tears.

Production companies have helped make the Stahl House famous, too. While flipping through the channels on TV you very well may catch a glimpse of it in countless films, television shows, and ad campaigns. The house appeared in Playing By Heart, Why Do Fools Fall In Love, Galaxy Quest, The Final Power, Thirteenth Floor, The Marrying Man, Prescription Murder, Corina Corina, Nurse Betty, Where the Truth Lies, Smog, Adam 12, Night Stalker, Emergency, and the very first episode of Columbo. Homer Simpson even stops by the Stahl House in the 2009 premier of The Simpsons. To me, it’s L.A.’s Hearst Castle. 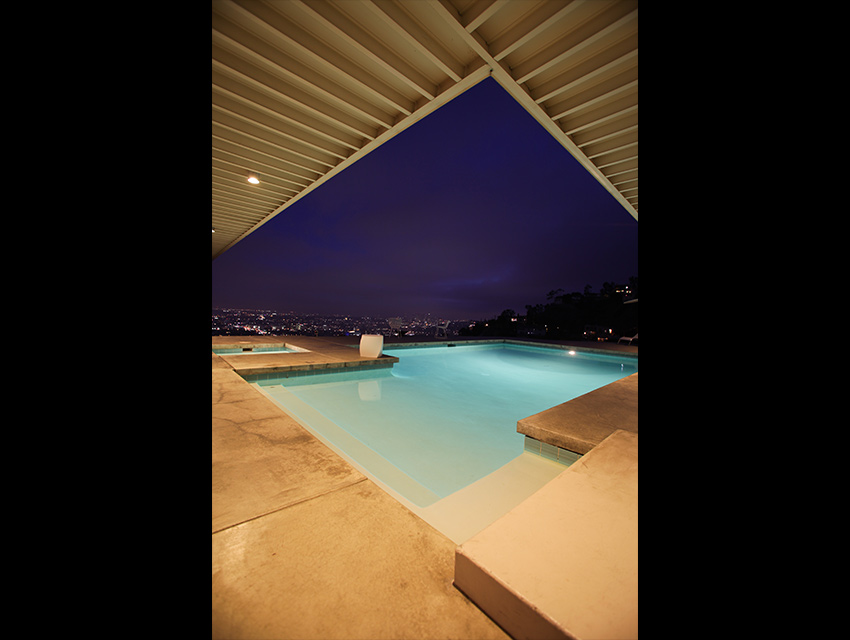 Buck and Carlotta’s Stahl’s three children, Bruce, Shari, and Mark, grew up in the midcentury modern masterpiece. Mark passed away in 2013. Bruce and Shari agreed to this interview when I visited the home on a recent public tour.

How did your parents discover the Stahl House lot?

Shari: Mom and Dad were renting a place nearby, just across the canyon. They were constantly looking at this side of the hill and wondering about the lots being created on the mountain. One afternoon, curiosity got the better of them; they got in their Cadillac and decided to take a drive to look at the lots.

Bruce: They ran across the owner of this lot by coincidence. He happened to be selling it, though, and a couple of hours later they made a deal. My dad spent the next two years laying down concrete along the edge of the property to square off the edges and increase the space.

Shari: It was fate that on the day my mom and dad decided to drive up the owner of the lot was there and that they were able to make a deal on a handshake. Today that would never happen.

How did architect Pierre Koenig get on board?

Shari: Dad built a model and was trying to find an architect to build what he wanted. Two architects turned him down because they thought it was un-buildable. Pierre had the drive and the desire to make it happen.

Bruce: Mom had read about Pierre and heard he liked working with industrial materials. In order to get this house made it would have to be with steel. Back then steel wasn’t very conventional. You couldn’t have built this house from wood—the windows wouldn’t hold up. So they used Bethlehem Steel. 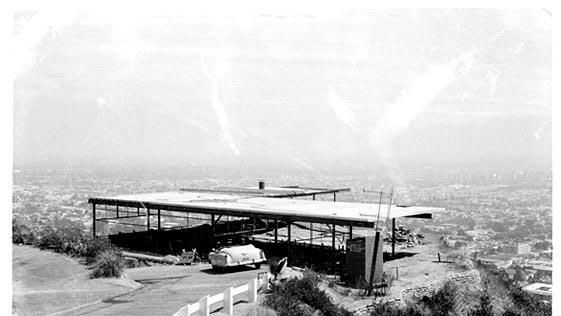 Stahl House under construction in 1959

What do you think has kept the house relevant?

Shari: It has been a combination of many people. Julius [Shulman] played a huge part with his amazing photography, Pierre kept the house alive with teachings, tours, and books. And our parents allowed people to come in for photo shoots, filming, and tours, and allowed visits from colleges and universities. Having Julius’ photograph seen around the world and opening the house up continuously has brought it to the level [of popularity] it has now.

How many times did Shulman shoot here?

Shari: Only that one time. All those pictures came from one day. The people in those pictures were friends of his. And now that black and white image is seen across the world and has become a signature of the house’s legacy. 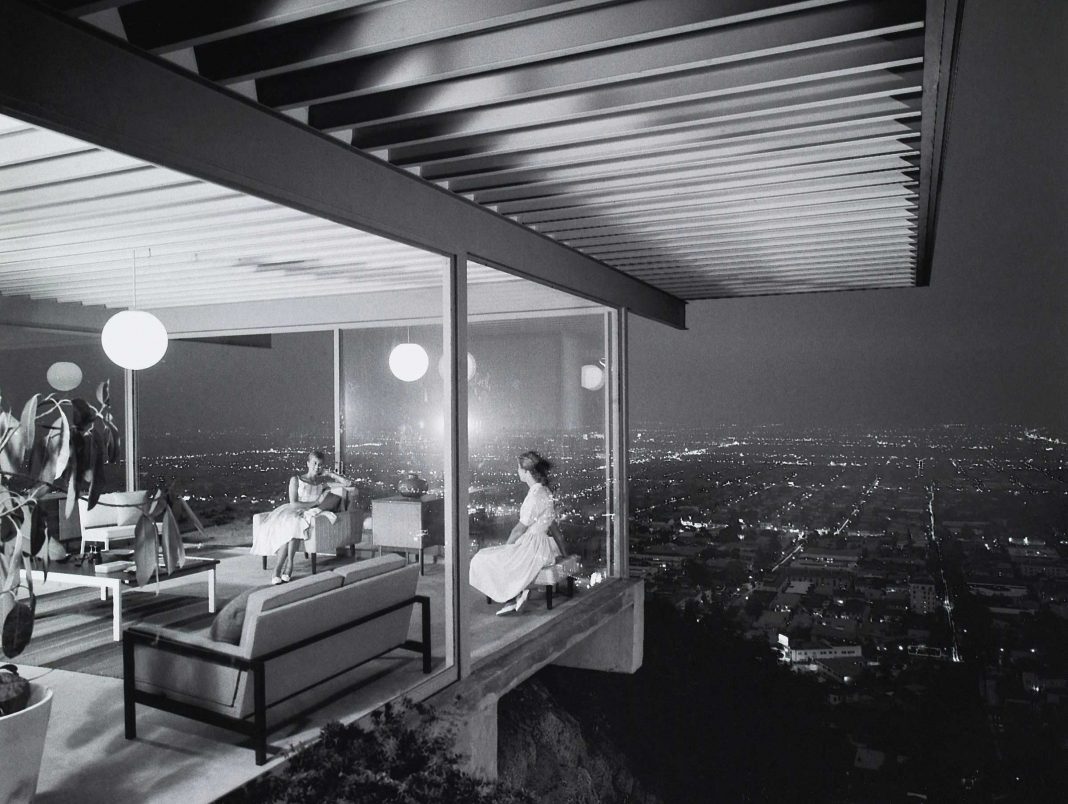 Having grown up here, what does the Stahl House mean to you?

Bruce: It’s our home. We were all so comfortable growing up here. It did not feel like we were in the pressure of Los Angeles. It’s a quiet and peaceful spot.

Shari: I absolutely adore it! Most of the best memories that I have took place right here in this house. It is the only place that remains constant in my life.

How can people view the house?

Bruce: Viewings happen several times a month. Although, I do encourage people to see the house sooner then later. Nothing goes on forever. 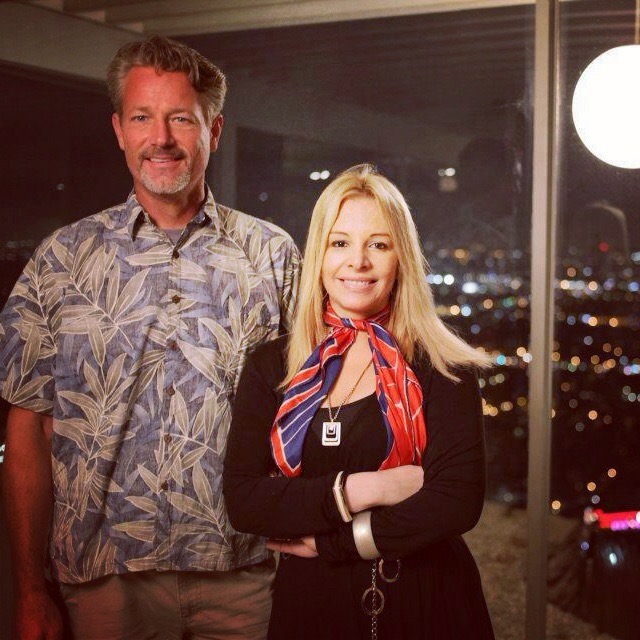 This article is dedicated to the loving memory of Mark Stahl, who passed away unexpectedly in 2013.

***
Originally published in the May 2015 issue of Los Angeles Magazine.

Alison Martino is a writer, television producer/personality, and L.A. pop culture historian. She founded the Facebook page Vintage Los Angeles in 2010. In addition to CityThink and VLA, Martino muses on L.A’s. past and present on Twitter and Instagram