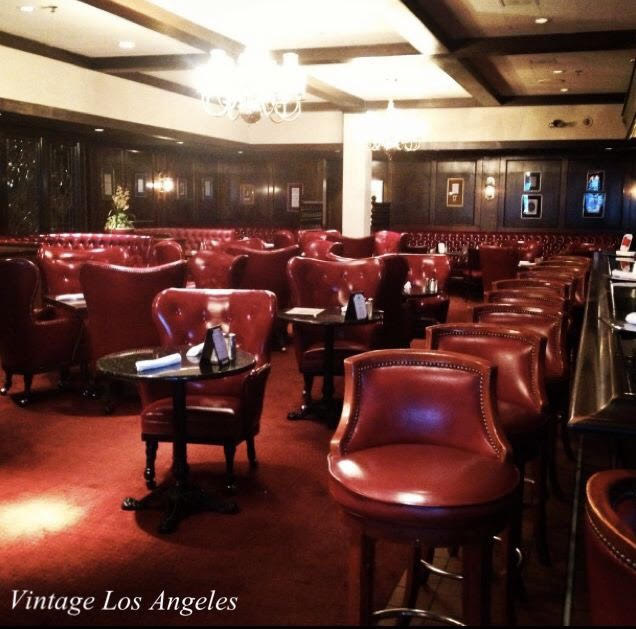 I had the great pleasure of interviewing Adam Lewis, son of Harry and Marilyn Lewis – the original owners of Hamburger Hamlet. I’m still in deep mourning over the loss of the Sunset Strip location. It closed its doors on December 17, 2011. I was one of the last loyal customers to walk out of those neighborhood doors that night, right alongside Nancy Sinatra and Rip Taylor. 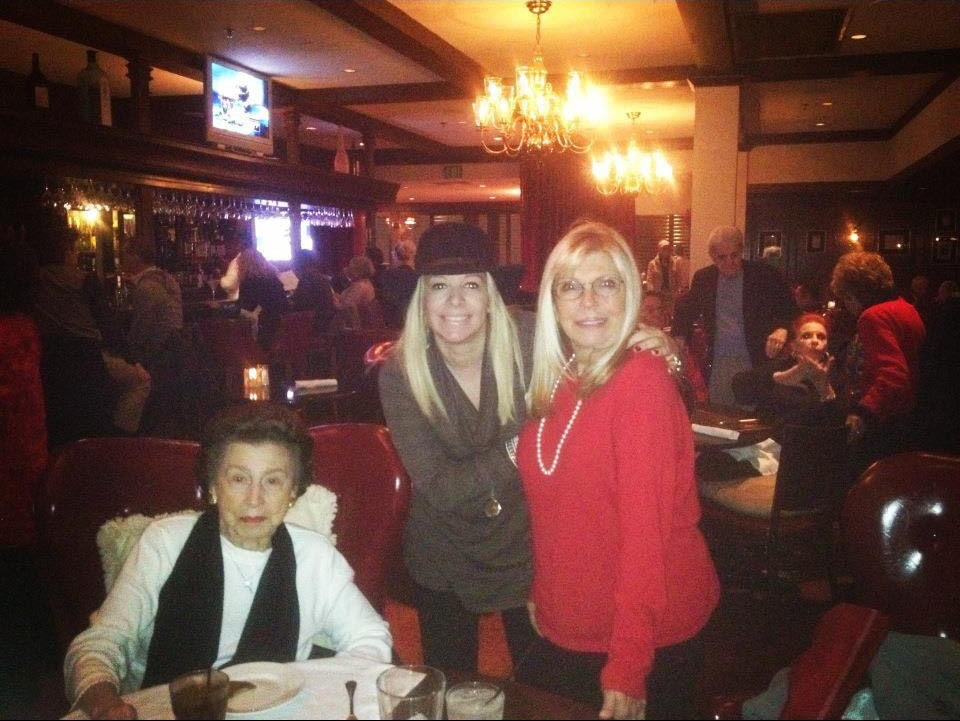 Alison Martino with Nancy Sinatra and Nancy Sr.
(with Carol Cook sitting behind us)

So why write about it all these years later? Because I feel it’s my duty as an Angeleno. The Hamlet had been such a big part of Los Angeles culture, and it helped shape my childhood. 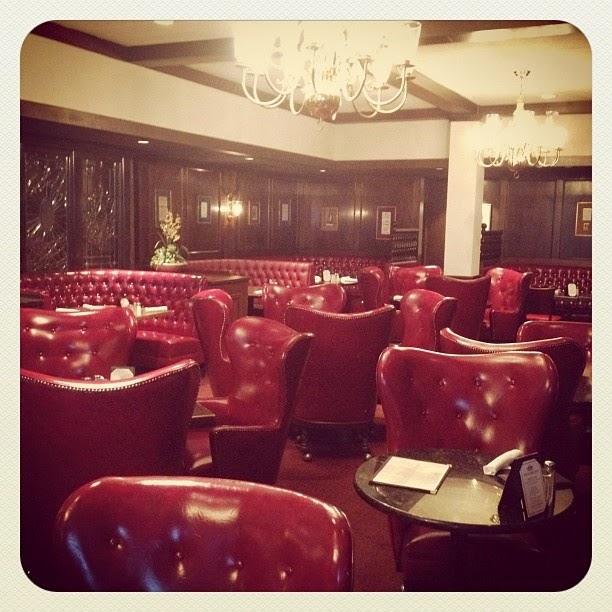 Nothing pained me more than saying goodbye. It was such a special place. A place where you bumped into celebrities and industry moguls in a casual environment, dining in dark lighting and giant oversized red leather chairs. But there was nothing casual about the clientele. Where else could you see Dean Martin sipping a martini at the bar, Lucille Ball hair spraying her red locks in the ladies room, Bette Davis chain smoking in the Tap Room, or Frank Sinatra taking a meeting with his publicist? I witnessed all of this first hand. Even the restaurant’s hostess, actress and singer Frances Davis (who was once married to Miles Davis) would occasionally burst into song and dance while taking you to your table. I remember Frances and Diahann Carroll discussing chord progressions in the lobby. It was great eavesdropping. For me, it was also a home away from home. At times the Hamlet felt like an extended room of our house. Raised a few blocks away, I had my 10th birthday party in the main dining room, and my high school graduation dinner in the Tap Room.

My first sighting of Lucille Ball, (and there were many of them), was seeing her walk past our table. I was eight years old. I followed her into the restroom. She was in the bathroom stall complaining about her pantyhose! I didn’t quite know what to make of it, so I ran out. When I was 18, I was seated directly next to Bette Davis. I remember specifically running to the restroom -once again – to call my mother to tell her. Bette must’ve gone through three packs of cigarettes that afternoon. When I was 22, I witnessed Frank Sinatra and his publicist, Lee Solters discussing one of Frank’s upcoming appearances. You see, eavesdropping at the Hamlet was also one of its perks. It was casual like that. And the stars felt comfortable too. Speaking of ‘comfort’, let’s get to the food. I had never had a bad meal or lousy service. The legendary menu pleads, “Eat the sides I pray you.” The fried zucchini plate is referred to as “zircles,” the hash browns filled with lavish sour cream are “Those Potatoes,” and the signature “Marilyn Burger” is named after owner Marilyn Lewis (not Marilyn Monroe which many thought it was). But the most popular dish was their lobster bisque, which was known around the world. 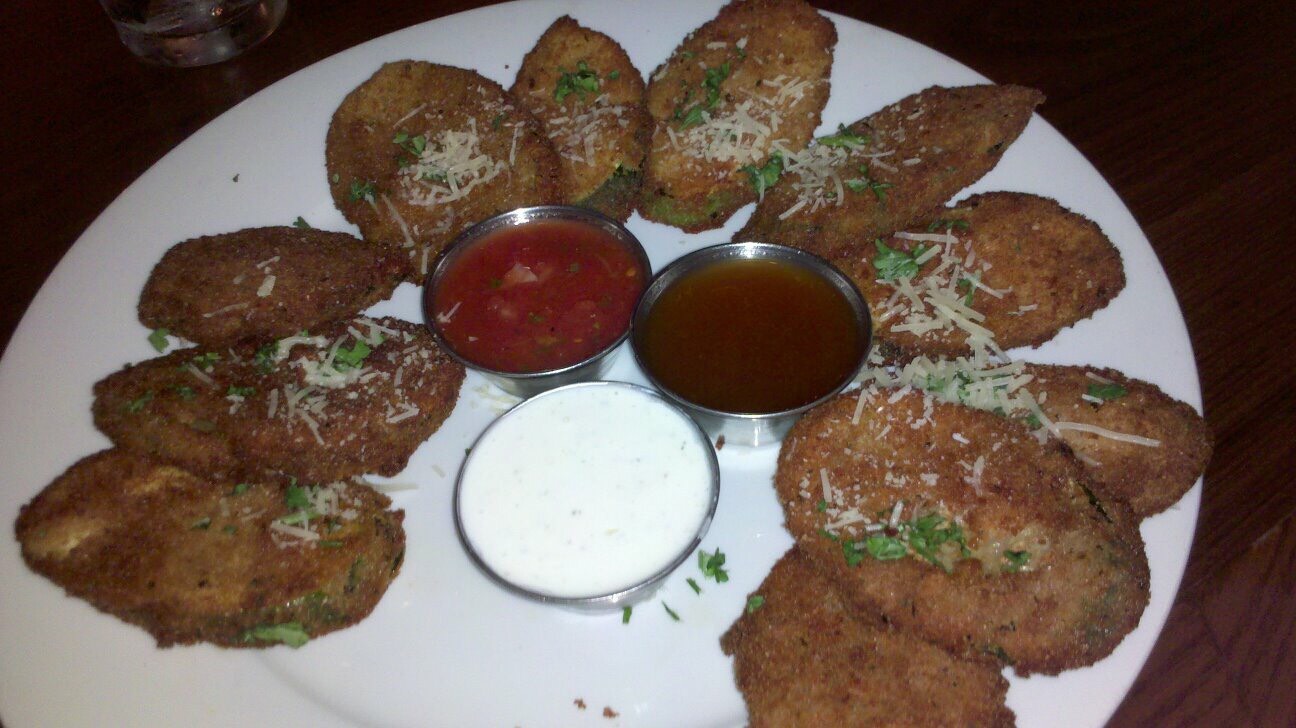 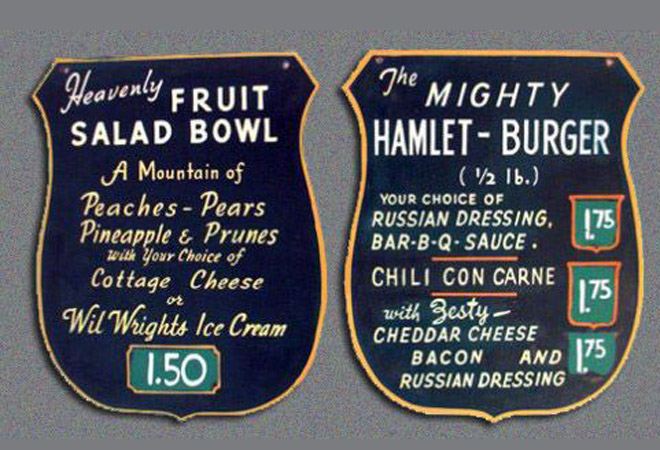 Some may remember the Hamlet’s very first location near the Whisky A GO GO. It was opened by Harry and Marilyn Lewis. Their son Adam tells me, “all people who knew Dad remember him as friendly, loving, and kind, and he was all that.” 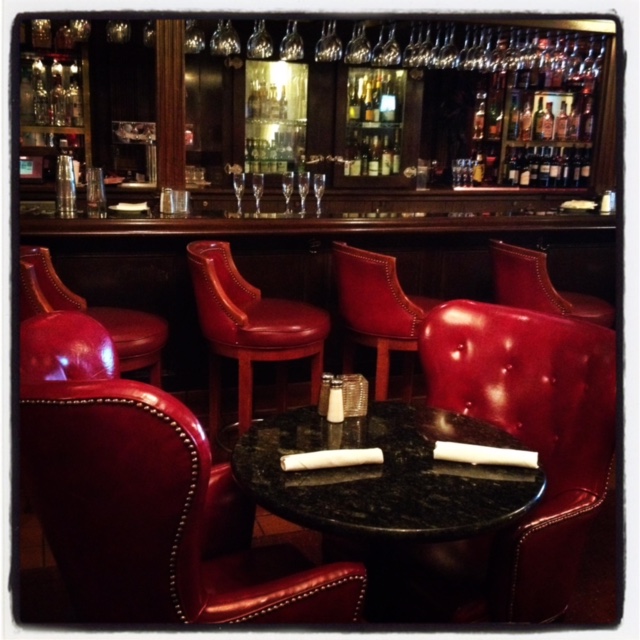 A contract player for Warner Bros in the 40s, Harry is best remembered for the movie Key Largo, which he starred in with Humphrey Bogart, Edward G Robinson, Lauren Bacall, and Claire Trevor (who won Best Supporting Actress for her role in the film). The film came out in 1948, but by 1949 the House Committee on Un-American Activities went after the movie business. Fewer films were released during that time, and the era of the studio system with contract players ended. In other words, Lewis could no longer earn a regular weekly paycheck doing what he loved, so he made another plan. 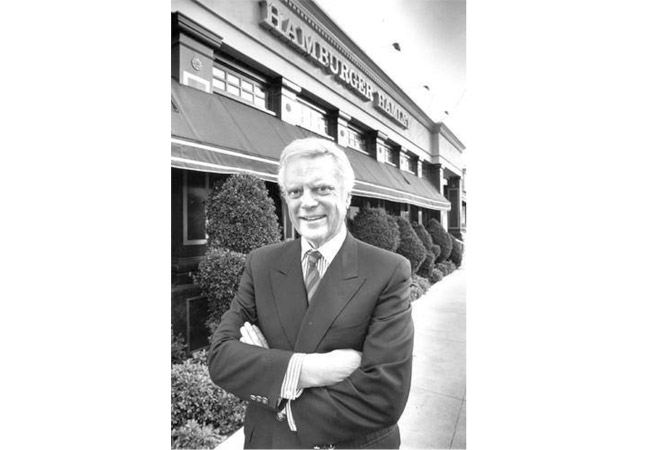 According to Adam, the idea of operating a restaurant for actors made a lot of sense to Harry. “When he met my mother, she drove that idea to reality,” he says. They spent their first date looking for a location. Hamburger Hamlet arrived in 1950. Marilyn was as progressive as they come, so even during the segregated 1950s and 60s, she always hired a staff of every race and nationality imaginable. 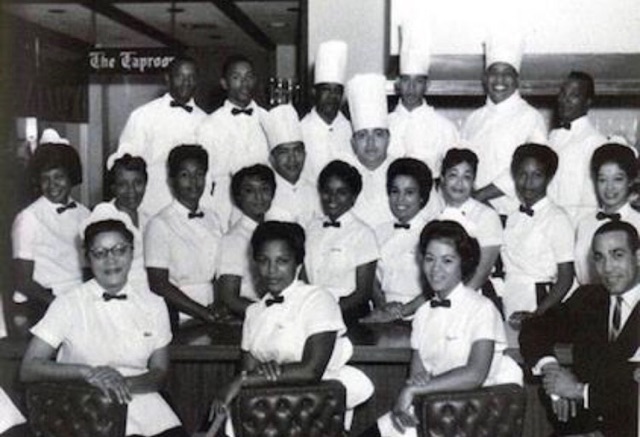 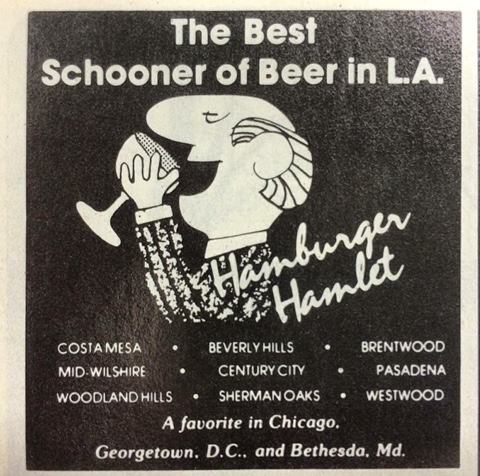 The family sold the chain in 1987 for $33 million, then went on to open Kate Mantilini in Beverly Hills. James Lauver, who had been a waiter at the Hamburger Hamlet on Sunset since 1977, went on to work at Kate Mantilini when the Hamlet closed in 2011. “The Hamlet was like a country club without the monthly membership,” he remembers. “I waited on everyone from Danny Thomas to Florence Henderson to Mel Brooks.”

Harry Lewis died in 2013. I was very fortunate to attend his memorial service at the Academy of Motion Picture Arts and Sciences. It was quite appropriate since it was directly next-door to Kate Mantilini. And sadly, the Lewis’s had to shut down Kate Mantilini soon after due to an offensive rent increase. As far as the Sunset strip location, two restaurants have failed in its place since. I vote for putting it back the way it was for 40 years. Don’t mess with success. (There is one hamburger Hamlet left in Sherman Oaks now run by Killer Shrimp).

Sadly, Marilyn Lewis also passed away earlier this year. Marilyn had several lives — restaurateur, fashion designer, movie producer — all of which required talent, hard work and extraordinary instinct. I was extremely fortunate to get this picture with her on closing night of Kate Mantilini. 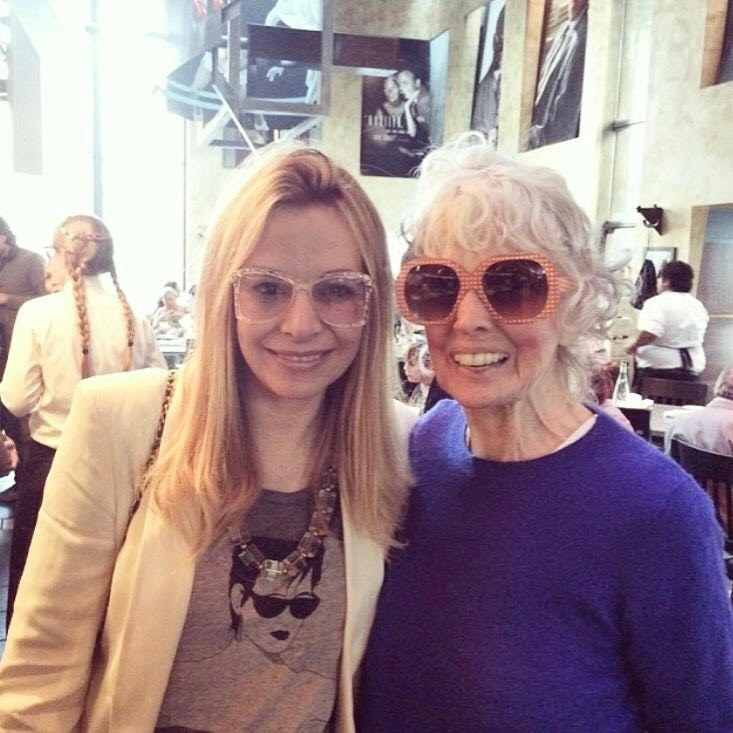 This past July 4, I spent it with two Hamlet legends: the hostess with the most-ess, Frances Davis, and star waiter James Lavier. And just like I told you Frances would sometimes do, here she is doing a little dance! 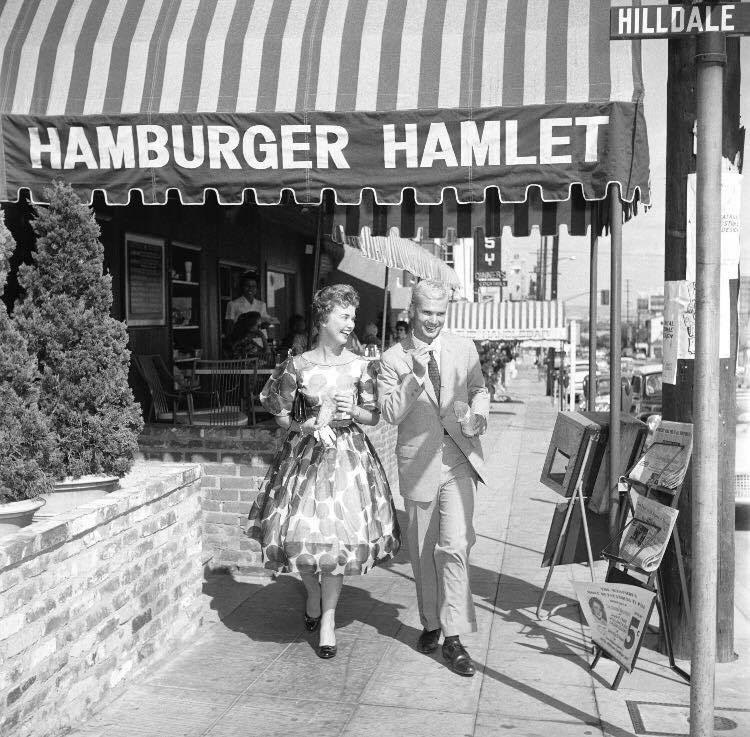 Dwayne Hickman, also known as Dobie Gillis, and his main squeeze strolling past the original Hamburger Hamlet on Sunset Strip between Clark and Hilldale in 1960.
Mptv Images 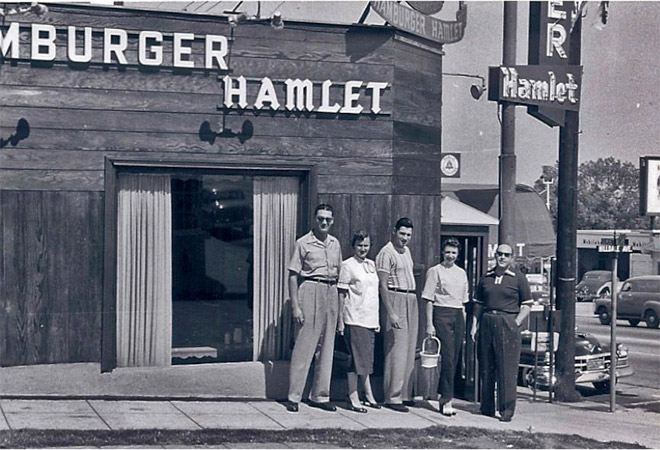 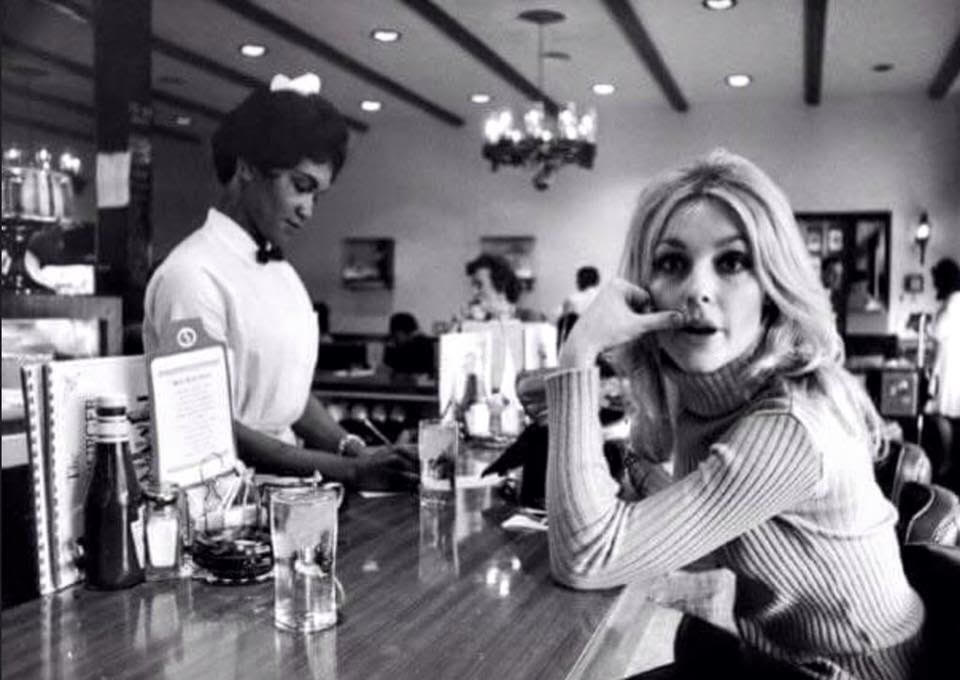 Sharon Tate at the original Hamburger Hamlet on Sunset Strip. 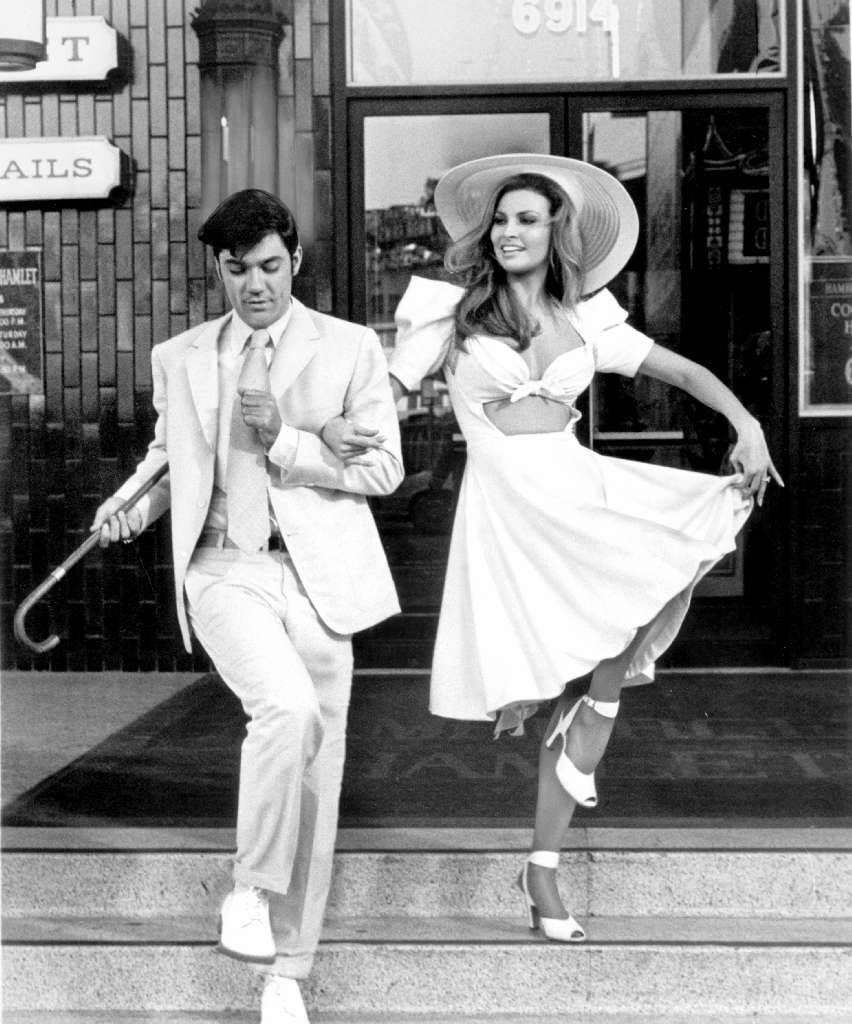 Raquel Welch and Rex Reed dancing in front of “Hamburger Hamlet” during the closing credits of the 1969 film, “Myra Breckinridge” 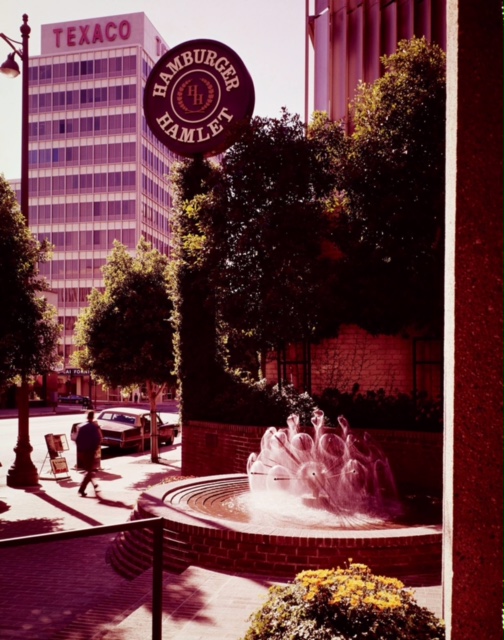 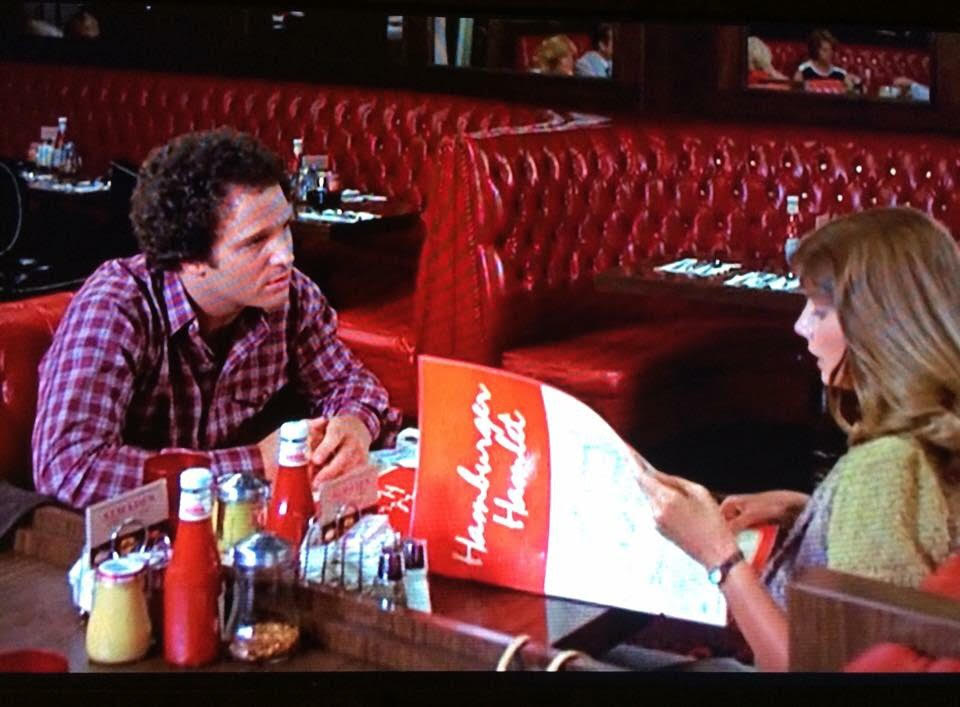 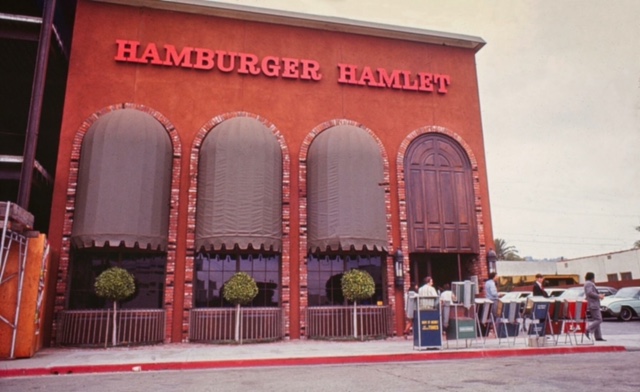 Hamburger Hamlet on Beverly Blvd. in West Hollywood circa 1978 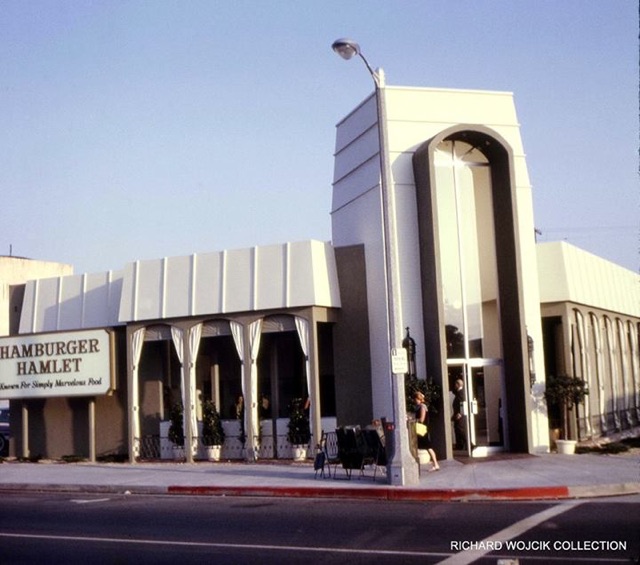 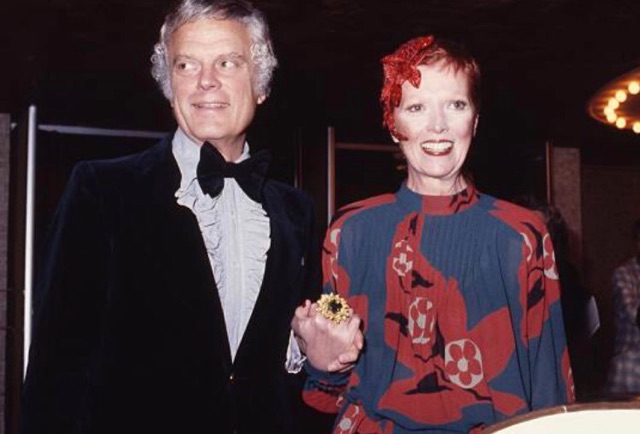 Hamburger Hamlet co-founders, Harry and Marilyn Lewis at the Century Plaza in 1980. 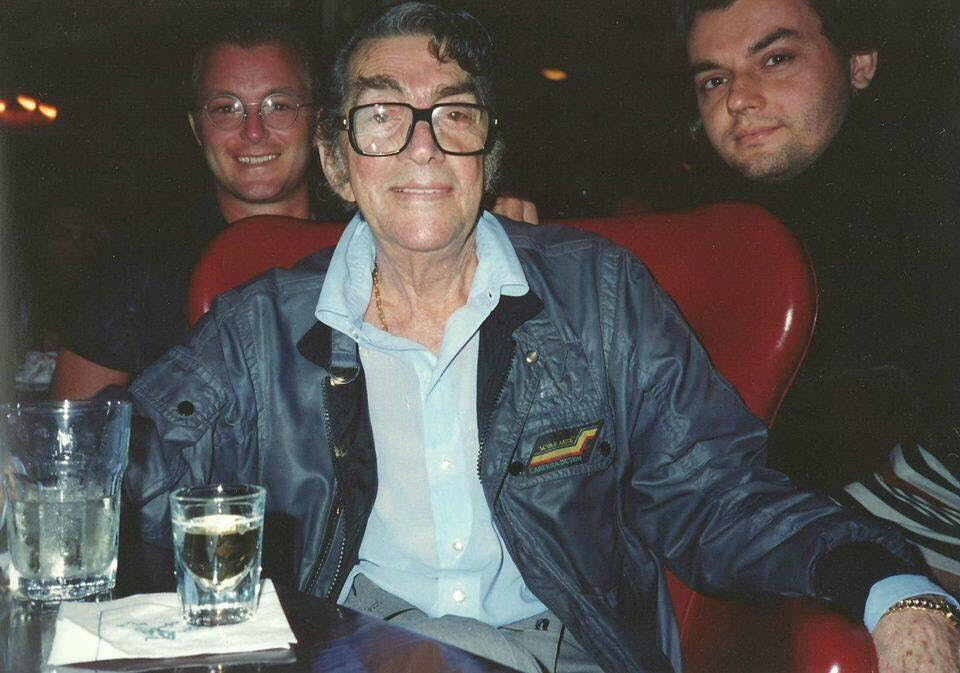 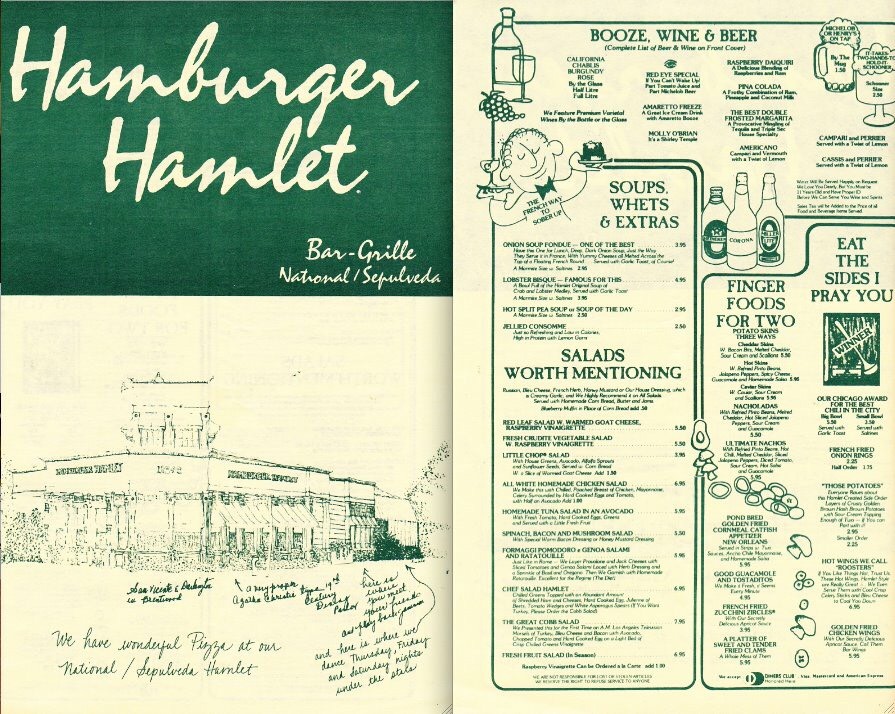 “Eat the sides I pray you” 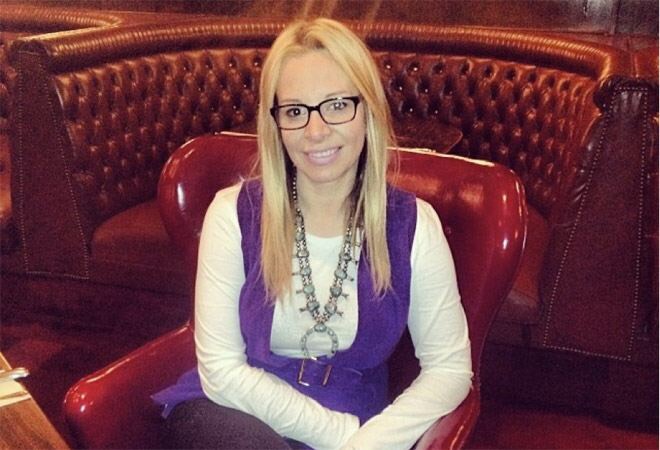 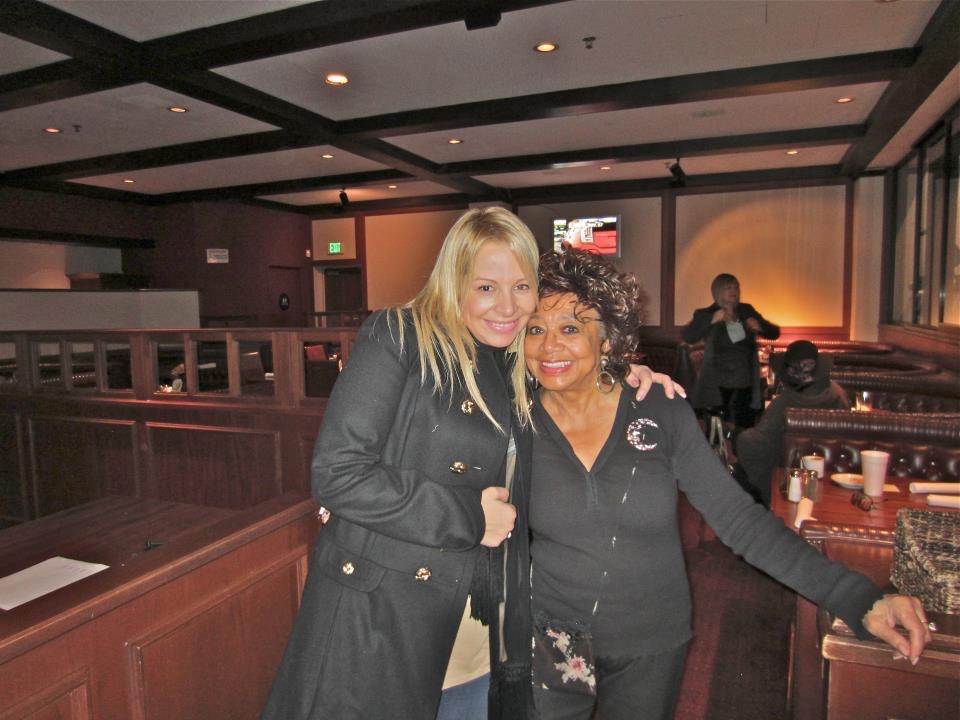 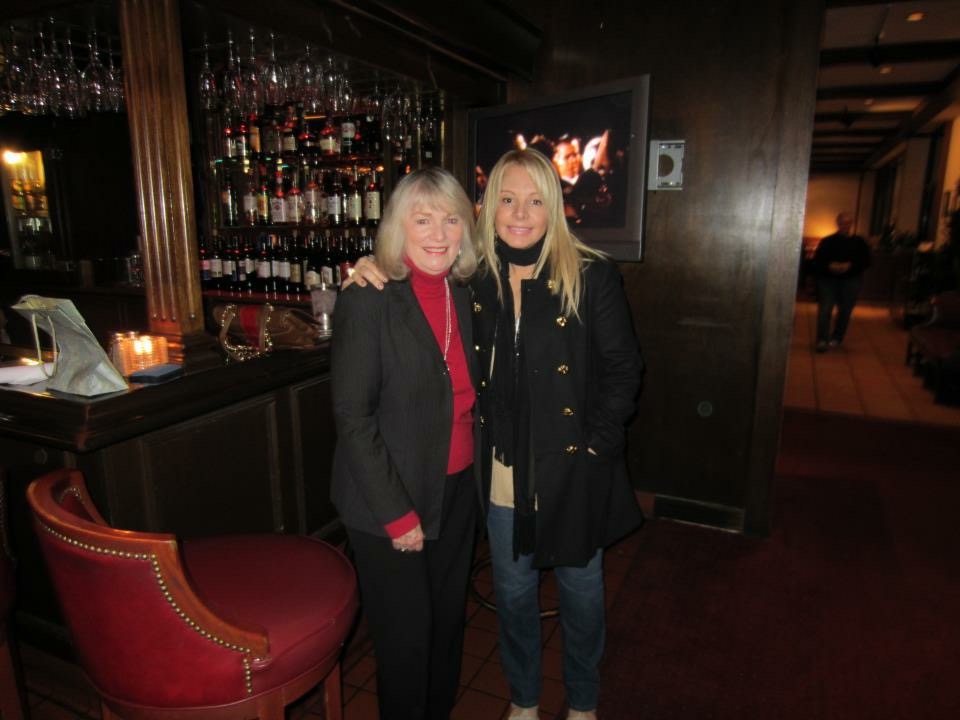 Alison and her mother Judi on closing night.