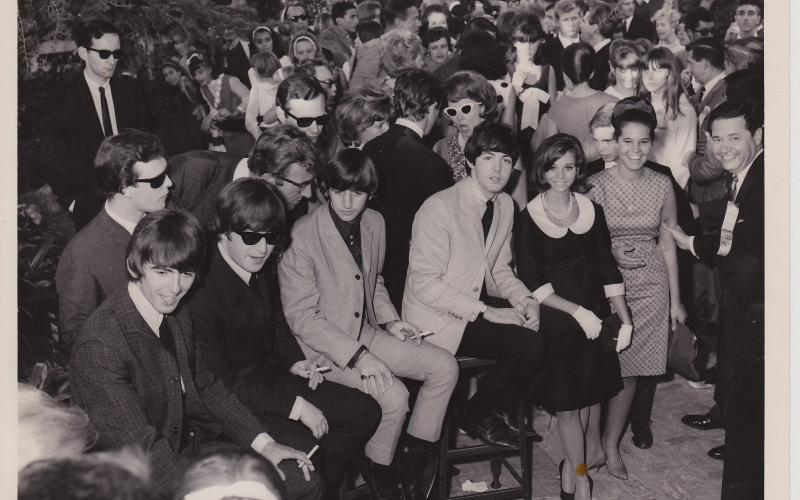 Unpublished photos of the Beatles are increasingly hard to come by, but I found a few to twist and shout about!

The Beatles at a garden party fund-raiser for the Hemophilia
Society in Brentwood in 1964. The fellow with his back to the camera, between Ringo and Paul, is their publicist (who was also an associate of the Byrds and others), Derek Taylor. So you have the Fabs and their four closest business mates. You won’t find many shots with all The Beatles and their inner circle, but there you are.
Photo courtesy of Bonnie Cowan Fleming

My friend Laura Fleming and I were teenagers when we first pored over images of John Lennon, Paul McCartney, George Harrison, and Ringo Starr in her family’s photo albums back in the ‘80s. I remember fixating on a snap of Laura’s mother, Bonnie Cowan Fleming, getting chummy with Paul and members of the band’s entourage at a garden party in Brentwood in 1964. She looked like Gidget in a polka dot dress from Jax boutique in Beverly Hills. Laura and I were so jealous. 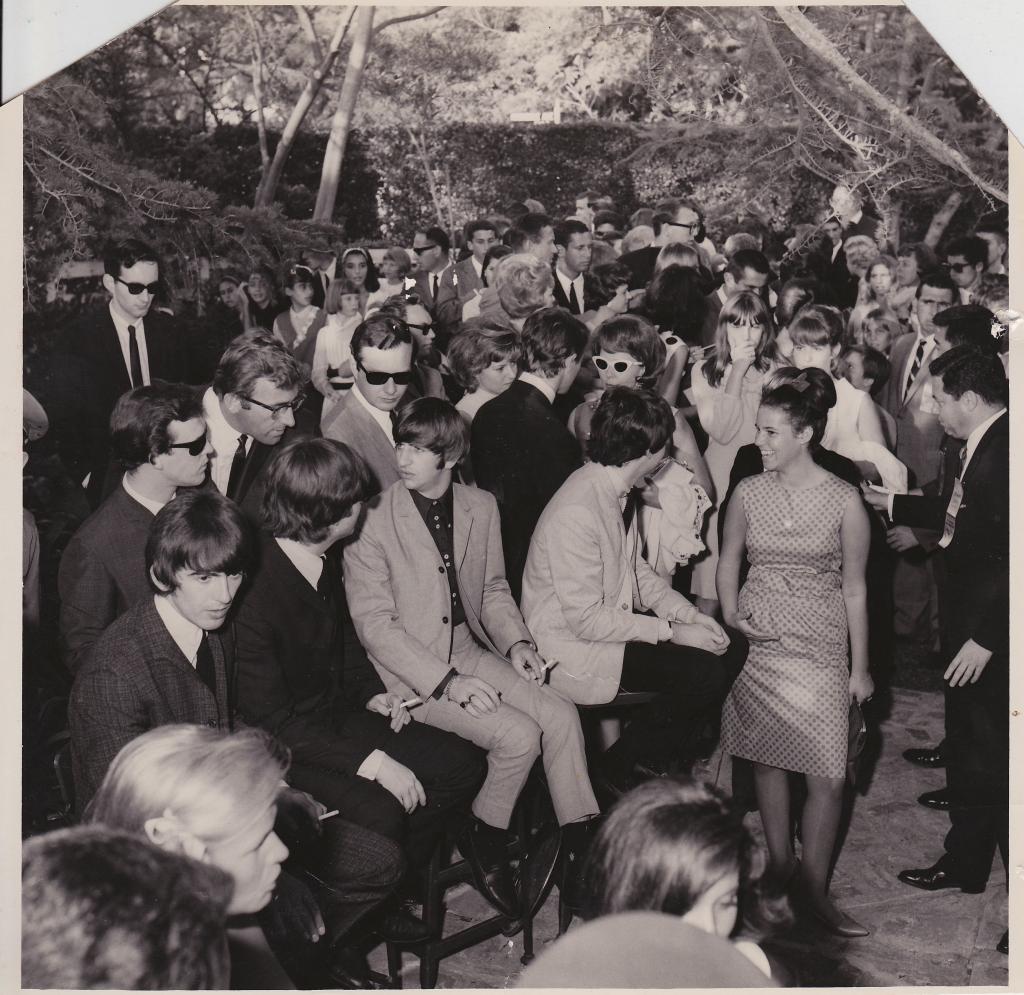 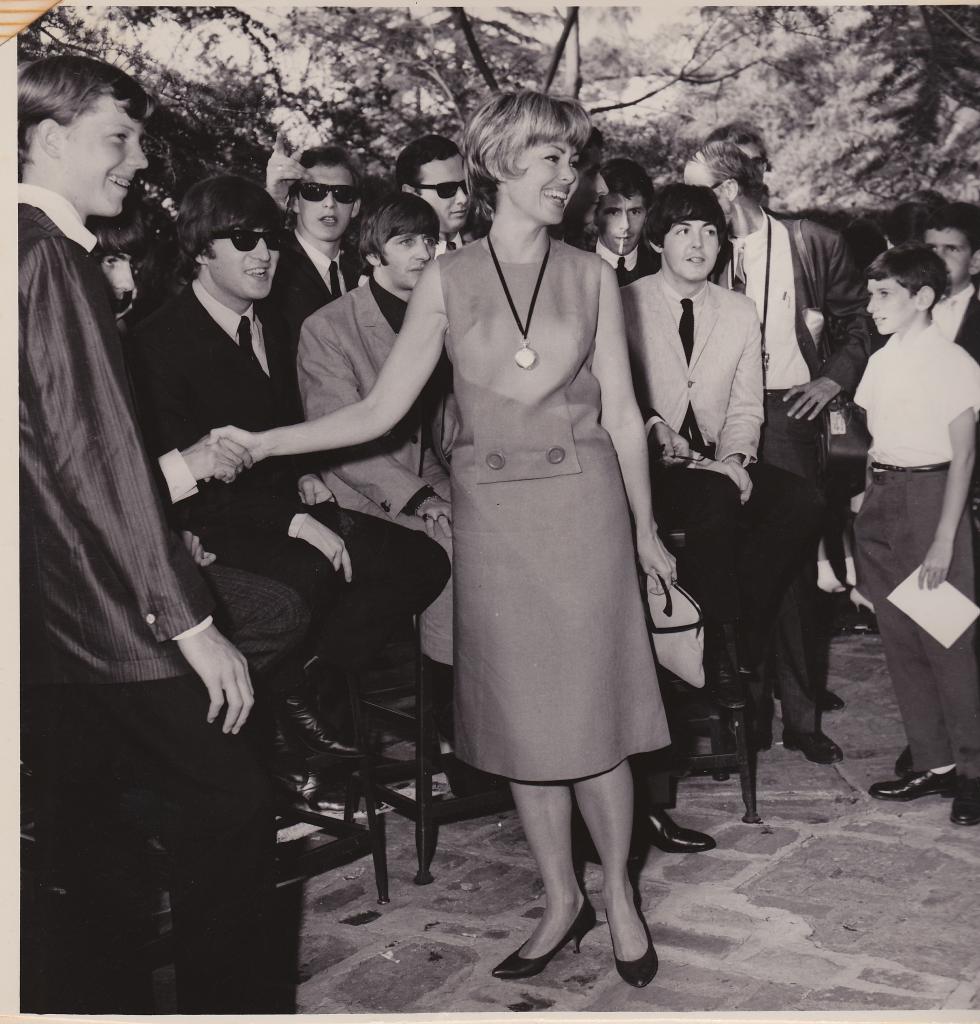 Bonnie hadn’t attended that garden party by luck. Laura’s grandfather, Warren Cowan, was the cofounder of Rogers & Cowan, a publicity firm that once counted Hollywood legends like Paul Newman, Kirk Douglas, Natalie Wood, and Elizabeth Taylor as clients. The company added the Beatles to that list during the band’s first trip to America.

Decades later—and with a little help from my friends—I’m thrilled to make the Cowan’s family photos and the story behind them public for the first time.

The garden party was planned for August 24, 1964, the day after the Beatles performed at the Hollywood Bowl in front of thousands of screaming fans. Alan Livingston was president of Capitol Records and had signed the Beatles that same year. Livingston was married to Sunset Boulevard actress Nancy Olson, and Nancy’s mother offered to host a fund-raiser for a hemophilia charity at her home. All Warren Cowan had to do was invite his roster of clients and the event would be crawling with celebrities and their offspring.

On the day of the event, guests paid $100 each to bring their kids to see the Beatles; kids got in for $25 a head.

“The first thing I remember of driving from Beverly Hills to that house on San Vicente was all the security and people trying get in,” says Bonnie. “We also had to present our ID. Once we got in, it was packed. It was a beautiful day. I got to meet the Beatles and they got to meet movie stars.”

“I remember seeing Kirk Douglas with Michael and Joel Douglas. Dean Martin was there with his children—Deana, Claudia, Gail, Dino, and Ricci—and of course Frank Sinatra was there with Tina and Nancy,” recalls Bonnie. “The Beatles were thrilled to meet the parents of these kids. They were getting to shake hands with people they would never have seen back in Liverpool. My father basically invited every celebrity in Hollywood with kids.”

I had the pleasure of interviewing Nancy Olson on stage at the Million Dollar Theatre during a Vintage Los Angeles screening of Sunset Boulevard. She said she was writing her memoirs, so I contacted her recently to see if she could share a few Beatles stories for this column. Not only did she remember the party like it was yesterday, she had written an entire chapter about it!

Here it is in an exclusive excerpt from her memoirs:

The Beatles in My Mother’s Garden

The Hemophilia Society and fundraising organization kept after Alan Livingston to plan events to raise money. Alan turned them over to me, and I had my first taste of working for a non-profit group. It’s all about money, however you won’t raise any unless you come up with some very seductive event. Of course, I knew the Beatles would be a fantastic draw; the question was what would make them happy and willing to participate. I think we came up with a brilliant idea.

My mother had a large home on almost an acre and a beautiful garden in Brentwood Park that was entirely enclosed by greenery. I asked her if she would be willing to host the Beatles in an afternoon event with children and their parents. We would serve lemonade and cookies and the children would go through a receiving line to meet the Beatles. My mother said she would love to host them and as she walked into her garden she said, “I have the perfect spot to put four stools, one for each of the boys. We will put them under the Deadora tree.” We reassured the Beatles that they did not have to perform and we would only invite our friends with their children and charge $100 for each adult and $25 for each child, with all proceeds going to the Hemophilia Society. Something about this invitation intrigued them and they did not feel used, but seemed happy to do this for Alan and his hemophiliac son, Peter.

My challenge was what to wear. I was seven-and-a-half months pregnant, so my options were limited. Since it was the end of summer, I chose my best maternity gown—a pale blue sleeveless silk sheath with ample space for my large tummy.

My hair was quite blonde, and of course I had to match my shoes with something; I wore pale beige leather pumps and accessorized with simple pearl earrings, my Schlumberge wedding ring with its diamond crosses, and my beloved pearl and diamond engagement ring.

The people who attended this party have never forgotten every moment of that afternoon. Even the Beatles talked about it years later. In fact, Paul McCartney discussed the party on Jimmy Kimmel Live in September of 2013.

We alerted the police and roped off the house and had the riot squad hidden in the garage. The event was not publicized but of course with so many invitees word got out. Alan was deluged with requests, but we finally had to cut it off at the maximum the police felt they could handle.

Alan had to arrange getting the Beatles there, and called his usual limo service, feeling obliged to tell them who they would be transporting. They turned him down—they didn’t want to risk getting their limo damaged by “crazy kids.” Alan called every limo service in town but none would handle the band. He called Brinks armored cars, told them of his problem, and asked if they would transport the group. They had to call their home office in Denver, and came back with a negative response. Finally Alan went back to his regular limo service again and said he would pay for any damage to their car. “It isn’t only that, Mr. Livingston,” was the answer. “It’s the loss of business if the car is laid up in the body shop.” Alan asked, “What’s the average fee you get per day per car?” They told him and he sent them a letter guaranteeing not only damages but loss of use of the car, too. They finally agreed and the Beatles were delivered to my mother’s home without incident. The riot squad came close to being called out of the garage. The police told us later that in one area the security rope nearly gave way to the surging crowd of kids. My mother’s next-door neighbor called and said he had a gun and warned us that he would shoot anyone who put a foot through the hedge into his garden. Thank God it all stayed under control.

We invited Hedda Hopper, the Hollywood columnist for the Los Angeles Times, who stayed with my mother on the front porch watching this spectacle with a certain amount of disbelief. She was concerned that the women with high heels were puncturing my mother’s beautiful manicured lawn. My mother responded by saying, “Oh, no, Miss Hopper–that only helps to aerate the soil.”

The invited children arrived through the front gate and barely glanced at the lemonade and cookies. They were shaking with emotion and the bravest took the first steps to the receiving line. I greeted and introduced them one by one to each Beatle. Alan was waiting at the end of the line to thank them for coming. Of course, we had photographers (not too many), who took pictures of each child saying hello to their heroes. These pictures are still exhibited all over the world and are prominent in people’s homes today. Our friend Dominick Dunne had a cherished picture in his New York townhouse of his beloved daughter, Dominique, curtseying as she said hello to Paul. Another little girl started to cry uncontrollably as she murmured, “I love you, Paul.” My daughter Liza was in love with Ringo and had tears in her eyes when she said hello. When Paul stamped out a cigarette on the ground, there was a mad scramble to get it as a souvenir. As the afternoon progressed, the helicopters arrived, circling our garden and the Beatles. When the chaos reached a crescendo, the guards said it was time for the band to leave. 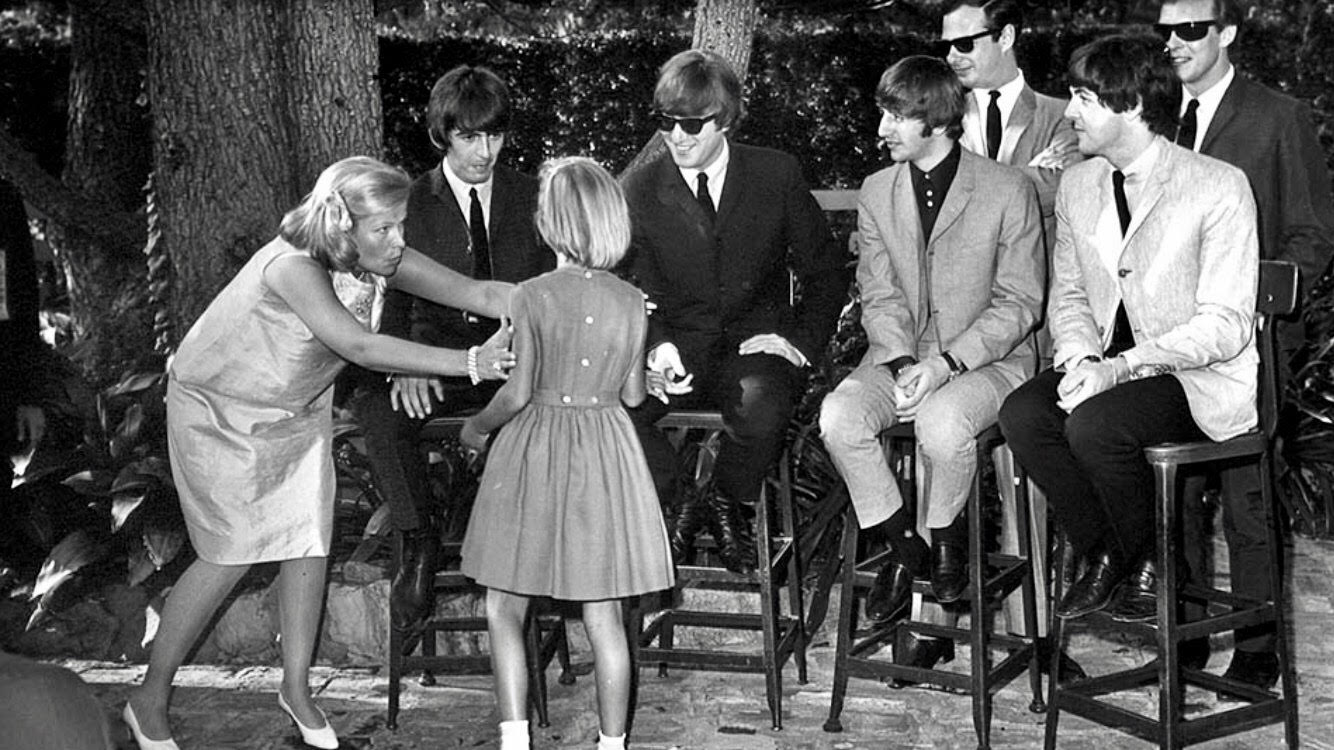 There was a picture of me attending to one of the emotional children on the front page of the Los Angeles Times the next day, and Alan arranged to have the photographs displayed in the lobby of Capitol Records the next week so the families could order prints. We raised good money for the Hemophilia Society, as Capitol picked up all the expenses. Brian Epstein personally wrote a check for $10,000.

At the end of the 20th century the Los Angeles Times published a beautiful book of the history of 100 years in Los Angeles. Alan and I were stunned to see the picture of the Beatles with the two of us in my mother’s garden captioned, “The most celebrated event in 1964.”

Invitation to the event, courtesy of Catherine Riese: 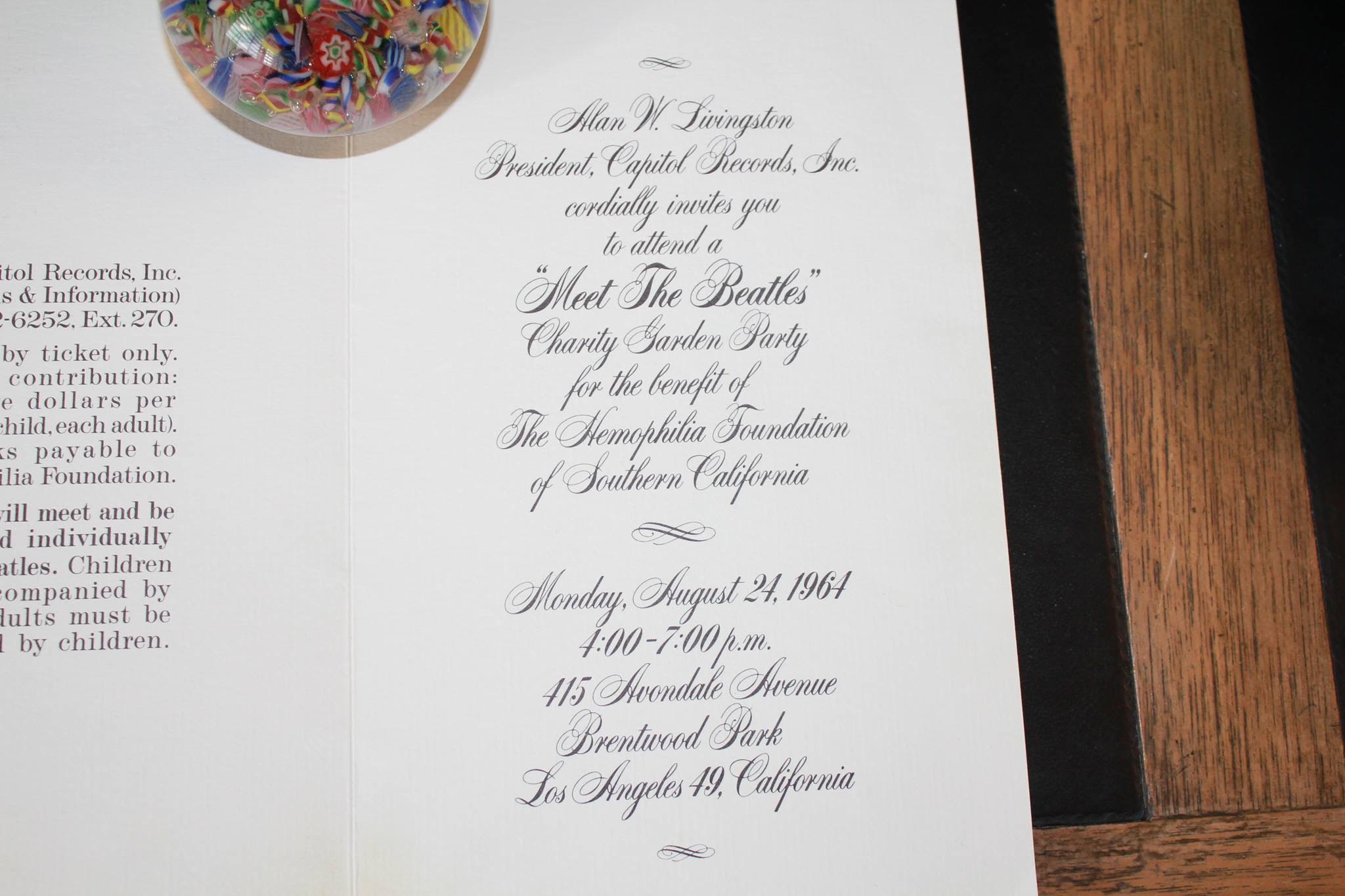 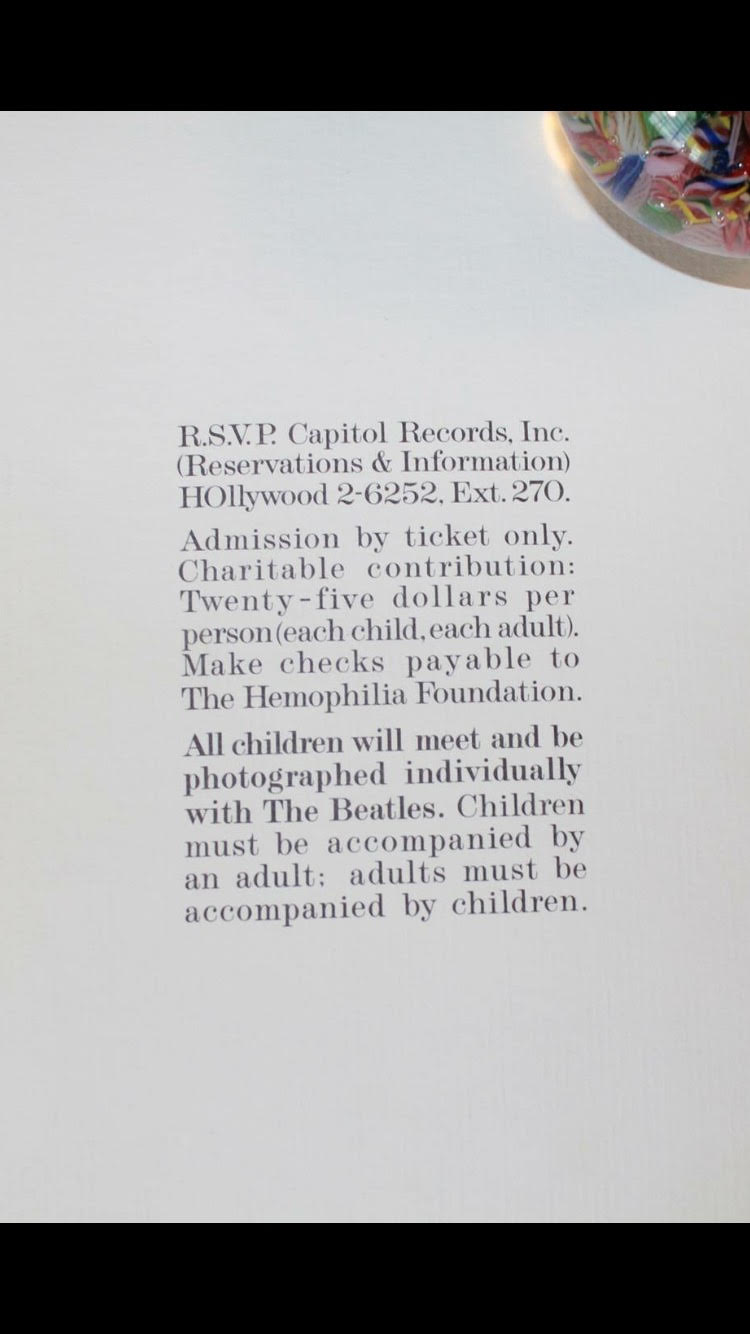 Portions of the above article were originally published in LA Magazine.