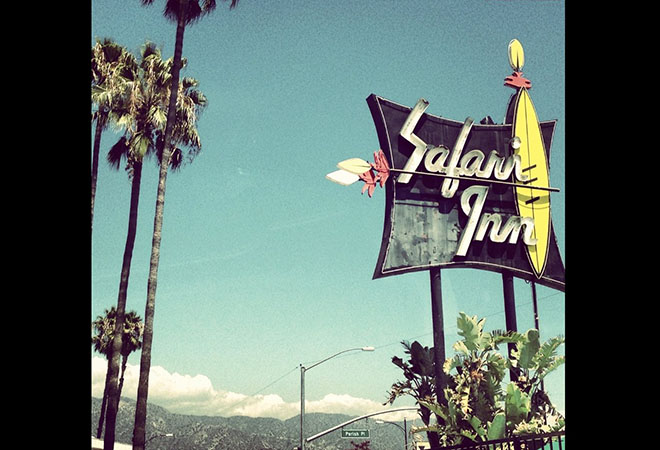 Burbank’s landmark hotel is a piece of the past and the pop-culture present.

The Safari Inn is one of Burbank’s most famous historical landmarks, and still open to the public. This Googie-style oasis has maintained its original retro décor, the recently restored neon sign has been shining its kitschy lights on Olive Avenue since 1955, and the shield-and-spears motif repeats in the management office and in the ironwork on the walls. What else would you expect from the cartoon capital of the world?

Throughout the entertainment industry, it’s considered a preferred location for television and film, including True Romance, Coach Carter, Apollo 13, Six Feet Under, CSI, Desperate Housewives, and The Partridge Family. It also fronts as Florida in the The Right Stuff, and the exterior was used on the album cover for the Wallflowers’ sampler, (Bleach).

There’s a variety of rooms, each featuring a jungle motif accented by leopard and zebra prints. The bathrooms are so large that you can actually dance the Watusi while drying off and they still offer complimentary parking, which is super old-school. OK, it’s not the Beverly Hills Hotel, but it’s great for a weekend stay and a dip in the pool. And, hey, take it or leave it, but here’s a tip: They rent rooms by the hour.

Portions of the above article originally appeared in LA Magazine.