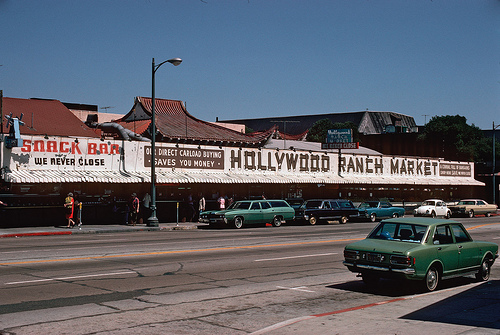 The intersection of Fountain Ave. and Vine Street in Hollywood once had a corner of madness. Its southeast quadrant was occupied by an institution called The Hollywood Ranch Market. A grimy sign atop the sprawling complex claimed: WE NEVER CLOSE. The clock hands always ran backwards at high speed. For 24 hours a day, seven days a week, the Ranch Market dispensed everything from rutabagas, roach powder, and bobby pins to booze, hot dogs, tacos, and cassettes tapes. They even sold flocked Christmas trees and tender turkey legs for a buck. 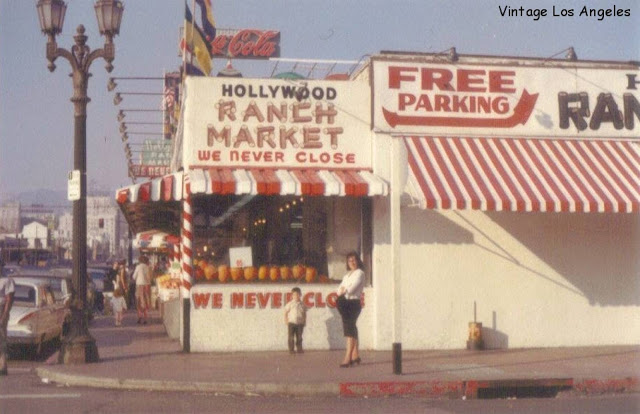 It wasn’t unusual to see personalities like Frank Sinatra, Ava Garnder, or Red Skelton at the Hollywood Ranch Market’s snack bar. Kim Novak could be seen shopping there twice a week when she lived at the Studio Club in 1955, and Orson Welles in his beat-up hoarder car was a regular.

It was a real eclectic mix of new and old Hollywood. One of the last photos of James Dean was taken across the street on that fateful afternoon in 1955. He had stopped in earlier for coffee and donuts before driving up to Northern California. 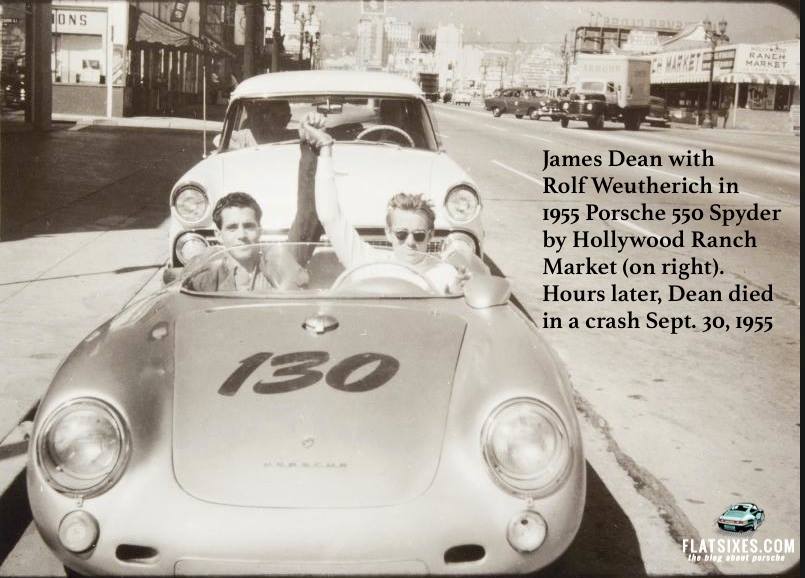 You can see the Hollywood Ranch Market in the distance.

At night, it was more than a dispensary for your hedonistic craving…it was the Oasis to insomniacs and other nocturnal creatures of Hollywood — including, presumably, vampires and out of work actors in-between gigs. There was a hotel across the way for struggling actors. The Hollywood Ranch Market was one of the few places where a person could cash a check in the middle of night. It had metal turnstiles, pinball machines, but no doors. The swarm of fruit flies hovering over the produce section was epic. The customers looked like rejects from novels by Nathanael West, Raymond Chandler and Ross MacDonald, or extras in “Adam-12”. It was normal to see gals in their robes buying cigs from the machines, and teenagers scoring fake IDs. Some have even claimed that their funky 4AM snack bar saved their lives. Altogether, it was an odd scene, that island in the night. It was seedy, but it was glorious. A collection of eccentrics like nowhere else. You can practically smell the smog and car fumes coming out of these images. 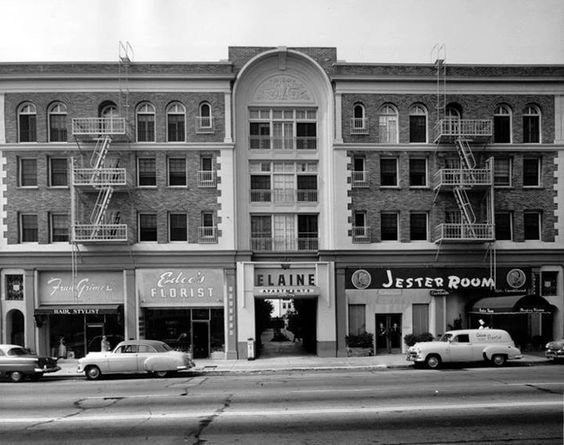 The Villa Elaine Apartments in Los Angeles, home to Man Ray, Frank Sinatra, Orson Welles and many more. (Still there!)

The Hollywood Ranch Market was wildly popular with the 1960s youth culture since it was close to the Hullabaloo, The Whisky A Go Go, Gazzari’s, the Sea Witch, Padora’s Box and P.J.’s. Musicians could could usually score a joint from dealers roaming the aisles after midnight. KHJ Disc Jockey, Robert W. Morgan had a tough time saying what he wanted one morning in 1968 implying that the orange juice that he bought at the Ranch Market might have been spiked with LSD. It was comedy gold.

After Steve Allen left NBC’s The Tonight Show, he had a TV show on ABC which used the Vine Street Theater across the street from the Hollywood Ranch Market. On dark, drizzly nights, a shuttle of production assistants would fetch bags of bread, soda, salami and cheese to bring back to the set. As a result, Allen did a lot of sketches and man-on-the-street interviews at the Hollywood Ranch Market. Story goes Steve Allen also used to hide speakers in the produce department, and would start talking to people. I give him full credit for basically inventing the original CANDID CAMERA. Must have been hilarious watching Ranch Market customers talking back to the tomatoes. 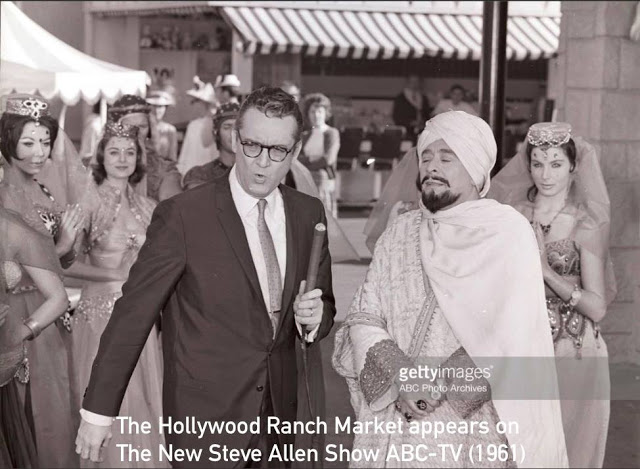 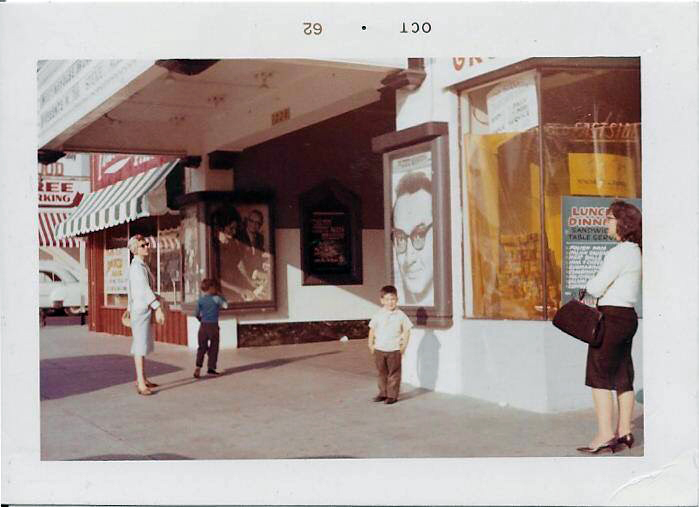 A rare snapshot of the Steve Allen Playhouse on Vine next to the Hollywood Ranch Market
Photo : Nick Faitos 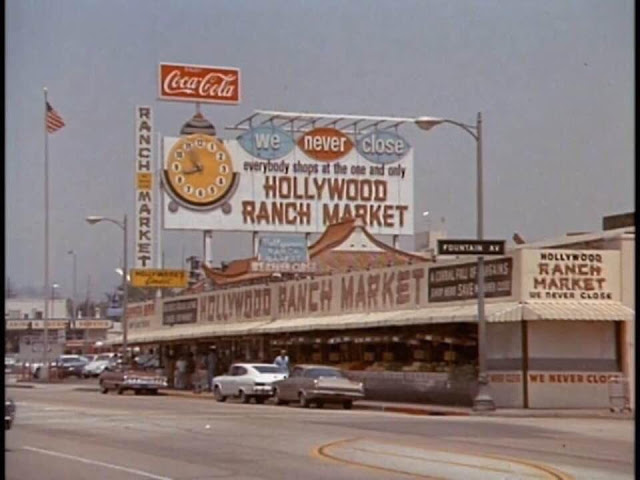 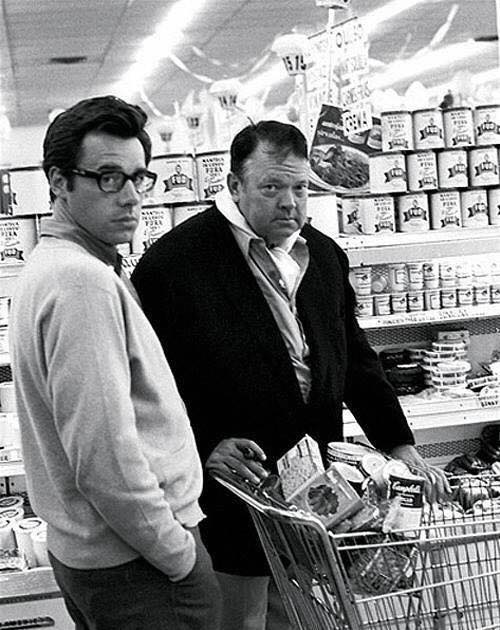 Peter Bogdanovich and his buddy, Orson Welles, stocking up on munchies at the Hollywood Ranch Market on Vine Street in 1971 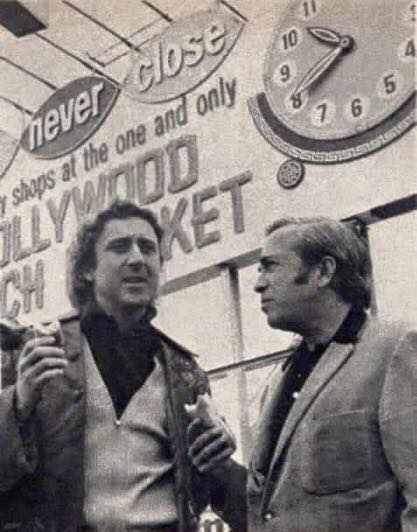 Gene Wilder on location at The Hollywood Ranch Market on Vine with TV producer Lewis Freedman in 1972. He was making “The Scarecrow” at the time. 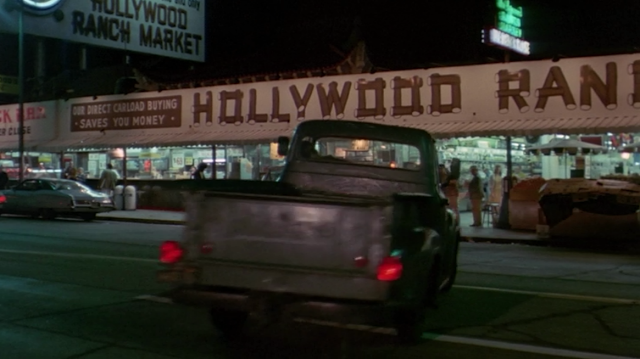 Screen grab from Minnie And Moskowitz (1971)

I also believe I saw a flash of it in an old Cassavettes movie recently, and there’s a quick shot of the clock in “Beyond The Valley Of The Dolls”. Sadly, the Ranch Market lost it’s local monopoly of madness, and it burned down in the early 80s. Today it’s a strip mall – the sad epitaph for most Los Angeles treasures that are no longer with us. Sure, looking back it may have been labeled as sleazy, dirty, and seedy, but it was just right. It was reality TV before such a thing even existed. 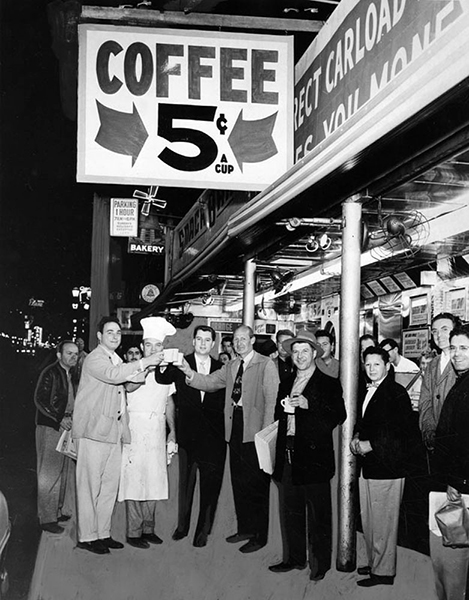 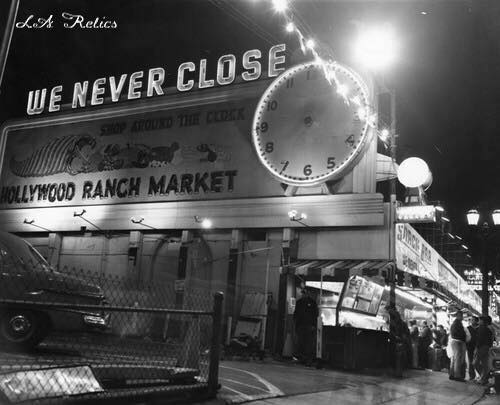 Exterior night view. The market’s neon sign with a clock reads, “We never close” and “Shop around the clock.”Sadly, they did.
Source: LAPL 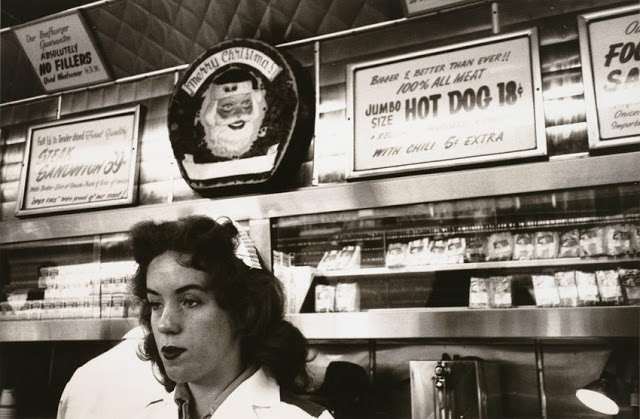 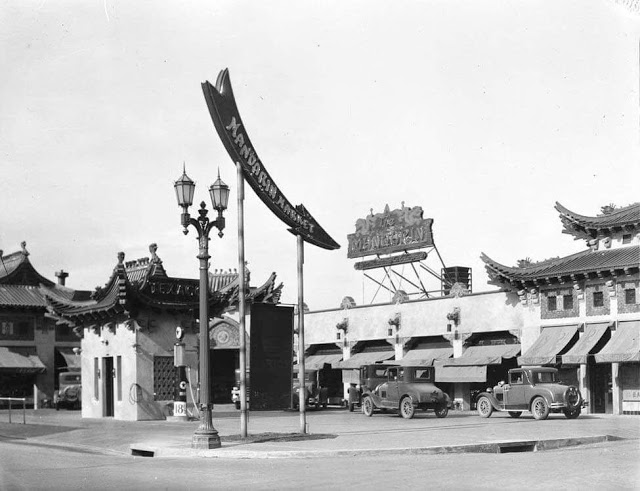 Back in the day the market had been called the Mandarin Market. 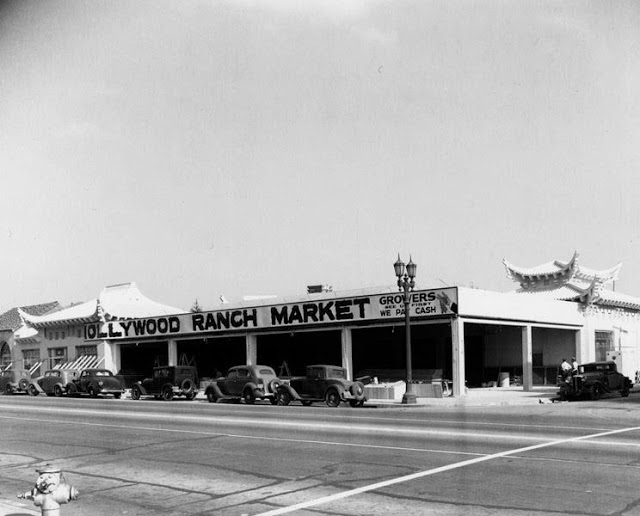 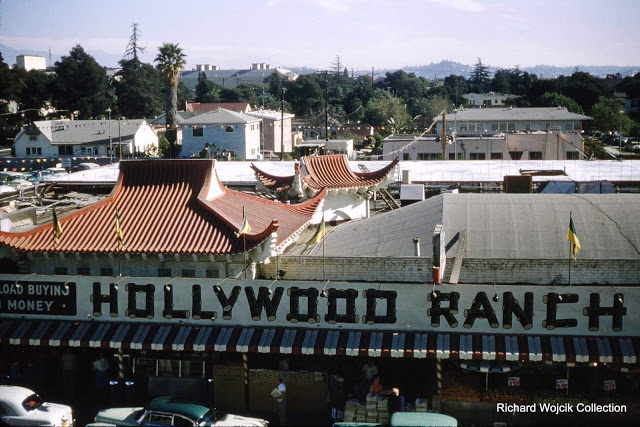 Notice the same Oriental roof on the Hollywood Ranch Market 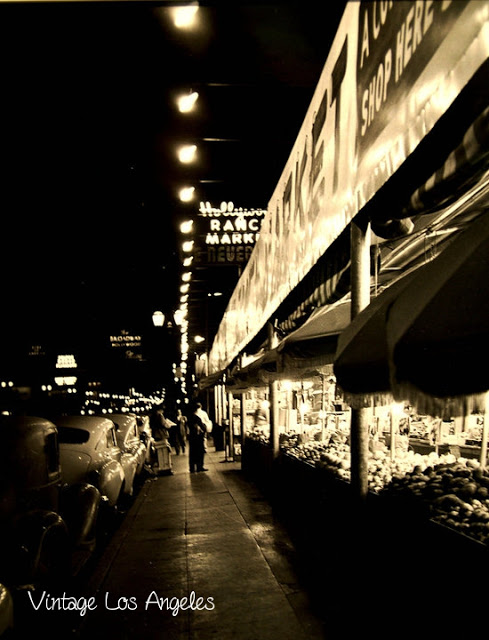 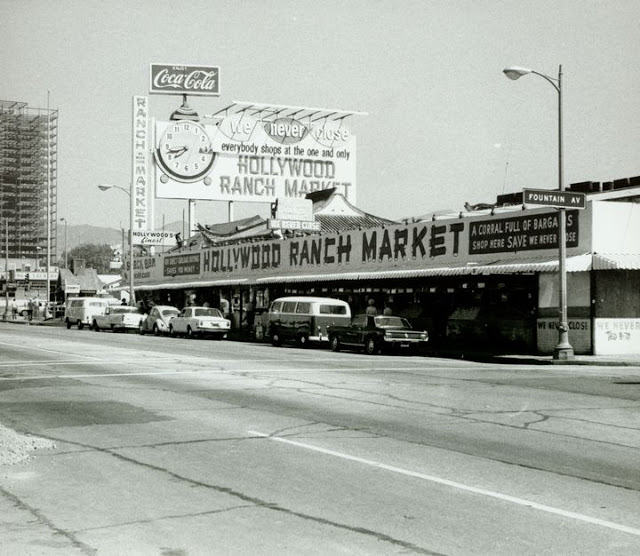 The smell of over ripe bananas and rotting oranges still fill my imagination. 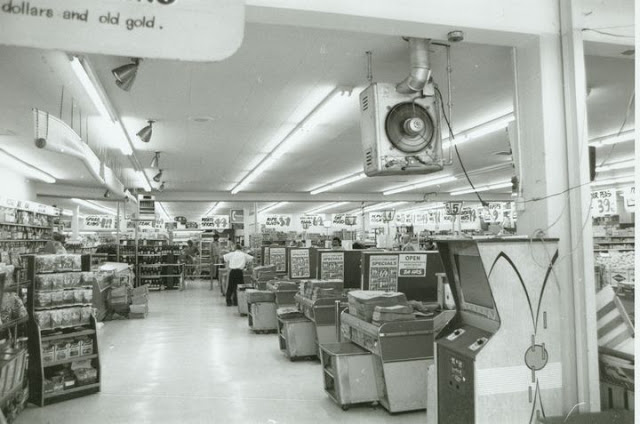 Interior of the Hollywood Ranch Market in 1976.
Photo Bruce Torrance 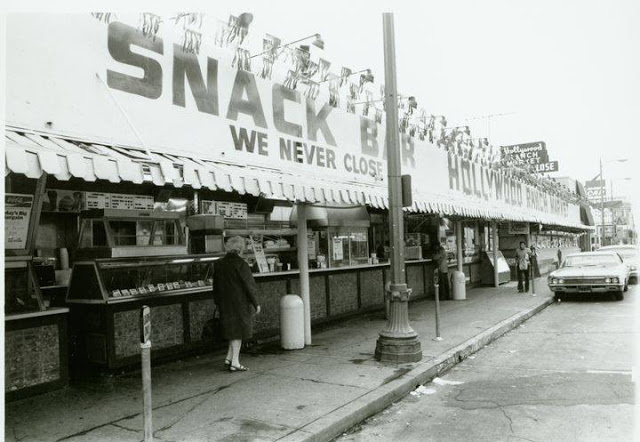 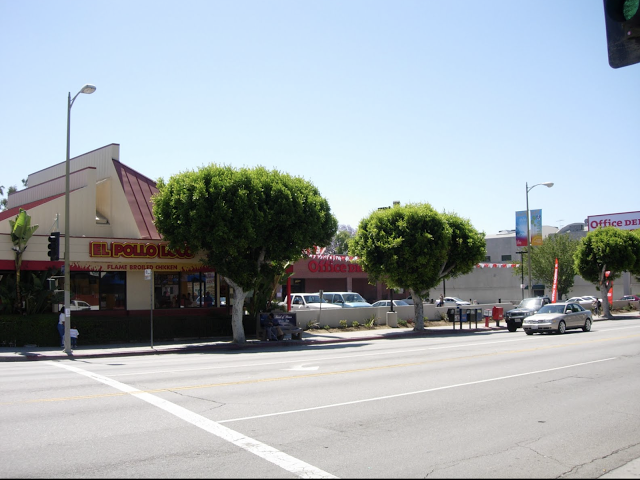 In 2015 I presented original Ralph Story episodes from the 1960s at the Billy Wilder Theatre courtesy of UCLA Archives. One of the episodes features the Hollywood Ranch Market. DJ, Rodney Bingenheimer was in attendance and actually spotted himself in the footage! Great moment!