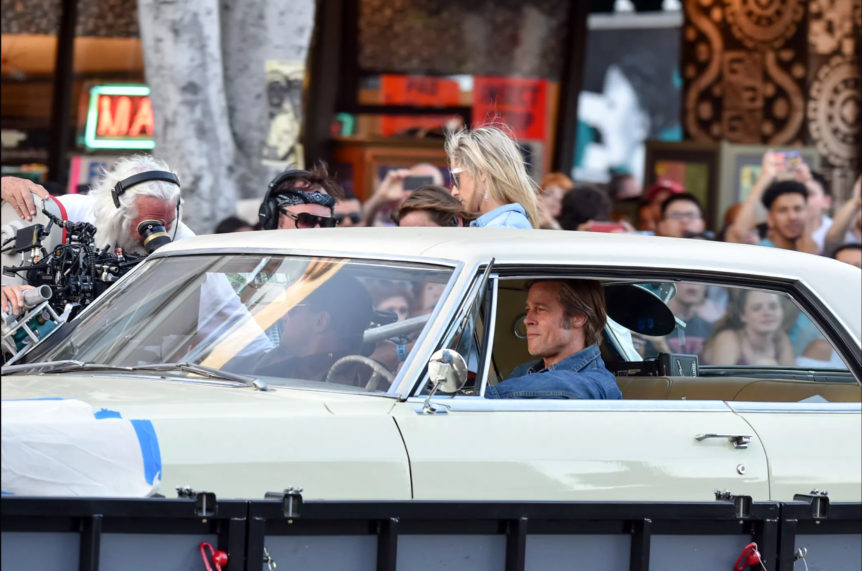 The production of Once Upon a Time in Hollywood recreated old theaters and storefronts with astonishing detail. 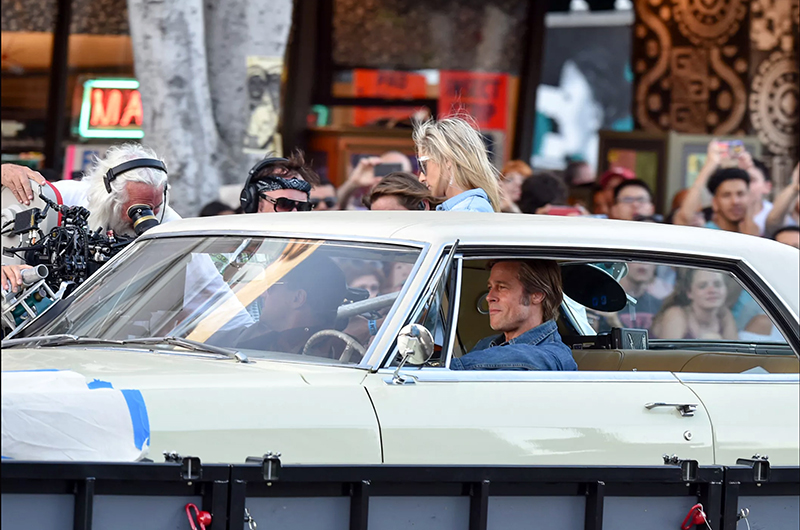 Brad Pitt is seen the set of Once Upon a Time In Hollywood on July 24, 2018 in Los Angeles, California. Photo: GC Images

Never question Quentin Tarantino’s commitment to his films. For the past week, a one-block stretch of Hollywood Boulevard—between Las Palmas and Cherokee—has become Tarantino’s vintage Los Angeles playground. It’s for his latest feature, Once Upon a Time in Hollywood, set in 1969, and the attention to detail is astonishing.

Tarantino’s 10-year passion project is a composite of overlapping stories taking place in the film industry at a time when old Hollywood began to collide with new Hollywood.

The main characters portrayed by Leonardo DiCaprio and Brad Pitt are rumored to be loosely based on legendary stuntman Hal Needham, and (then-roommate) Burt Reynolds. Needham was best known for his frequent collaborations with Reynolds. Sharon Tate, played by Margot Robbie, is their neighbor.

Exterior scenes of this film could have been created on a soundstage using stock footage and computer-generated imagery, but Tarantino chose the streets of Los Angeles as his canvas. Given Tarantino’s attention to detail and nuanced understanding of the period, shooting on a backlot would have been a deal killer.

Musso and Frank Grill was my basecamp for sleuthing on July 24. The restaurant had previously been shut down for days while a pivotal scene was filmed inside.

I witnessed production crews work tirelessly around the clock as vintage store fronts and street props were recreated, nearly bringing tears to my eyes.

I witnessed the return of the Pussycat and Vogue theaters, complete with film titles and original posters advertising the movies released at that time. (The Vogue had been a first run feature theater, and the Pussycat was an X-rated adult film theatre.) 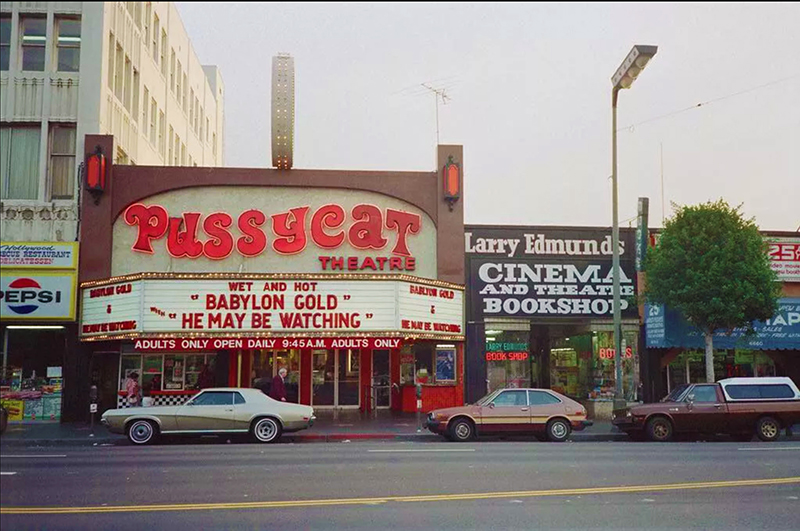 The Pussycat Theater in the early ’80s. It looks exactly like what Tarantino re-created. Photo: John A Mozzer

I waited in anticipation to see which film titles would be displayed on the marquees: The Night They Raided Minsky’s went up on the Vogue, and Babette and The Turn On went up on the Pussycat. 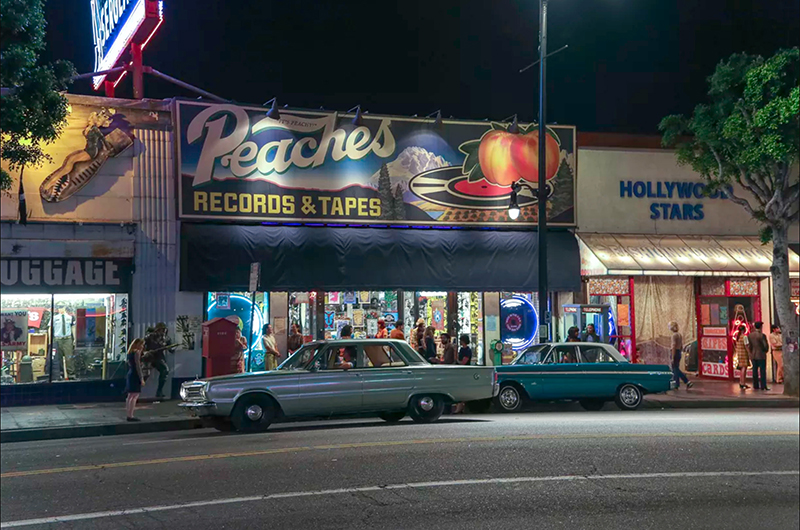 In the window display of Peaches Records were the latest LP’s, rock flyers for local venues such at the Palladium and Troubadour, and original Fillmore Posters, which were extremely popular at the time. It was exhilarating to see vinyl hanging in the windows again.

One of the flyers said, “3 cassettes for $1.49!” Other facades created were as follows: a lingerie shop, a TV appliance store with old televisions by Zenith and RCA, a vintage market advertising old ads for Coca-Cola, Miss Clairol and Spearmint Gum, a head shop, a camera repair shop featuring rolls of Kodak film, and a shoe store promoting Hush Puppies, Thom McAn, and Minnetonka Moccasins.

It was a time machine experience LA natives could only dream of. Not only were these historic facades recreated in front of our eyes, they were resurrected in their original locations.

It didn’t stop there. Logos such as KHJ, The LA FREE PRESS, “Hobo Kelly,” “Playboy After Dark,” “The Rosie Greer Show,” “Seymour’s Fright Night,” and “Honey West” were just some of classic advertisements displayed.

All of these beloved visuals were part of the DNA of Los Angeles during the 1960s. Store fronts, bus benches, billboards, neon signs, and murals all helped resurrect the psychedelic era. Extras dressed in vintage garb and hair shuffled down the boulevard. It was a transporting experience. 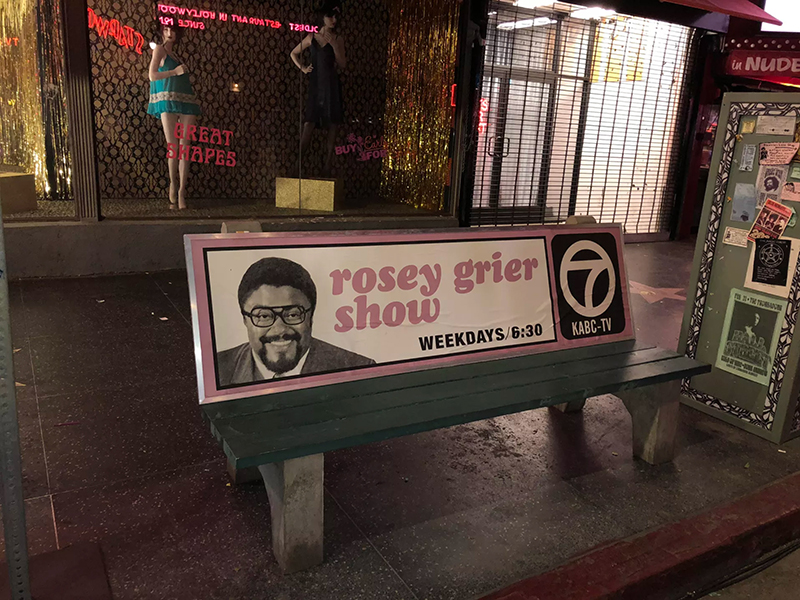 A recreation of a bus bench advertisement for the “Rosey Grier Show.” Photo: Alison Martino

Hundreds of residents, tourists, and Tarantino enthusiasts, watched dozens of gorgeous midcentury vehicles, old RTD busses, and a powder blue Karmann Ghia driven at top speed by Pitt himself, drive backwards and forwards, with Tarantino and cinematographer, Bob Richardson alongside. 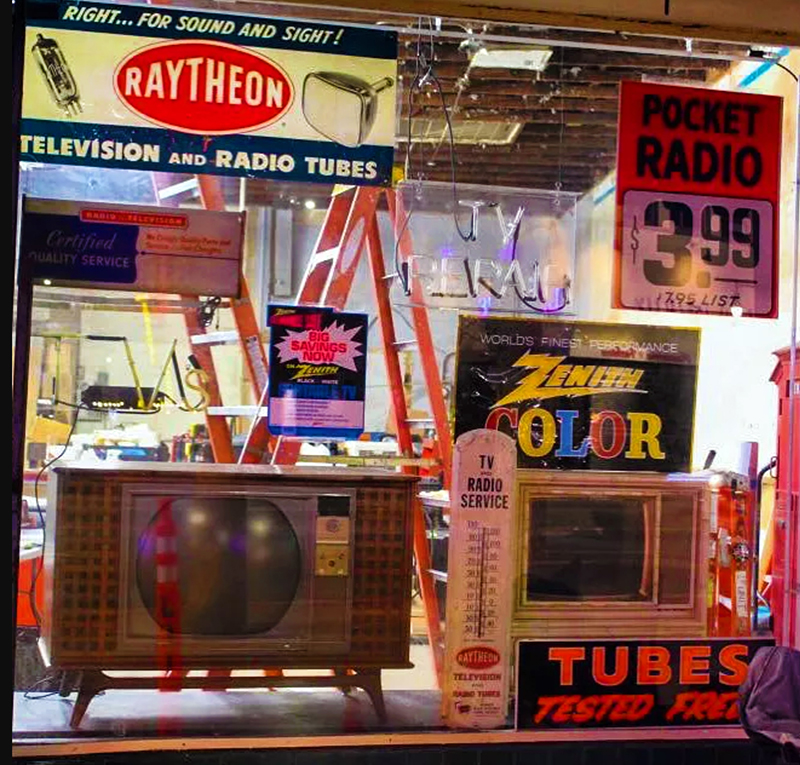 Another scene was a slower driving sequence with Brad and Leo in the front seat of a creamed colored Caddy, very similar to the one Mr. Blonde drove in Reservoir Dogs. The crowd screamed like teenagers as the two drove past several times, waving to the onlookers between takes.

Tarantino sported a Dashiki shirt, bandana, and pipe as he directed the two in front, while being towed by a process trailer. To see the man in action at the epicenter of Hollywood Boulevard was a far out scene.

It felt like a Vintage Los Angeles amusement park. What struck me the most is the practical demand of shooting on Hollywood Boulevard. I can imagine a world, in which for whatever reason Tarantino had been denied filming on the actual boulevard, he may never have made this movie.

Before coming to the boulevard, he recreated a Taco Bell in Tustin from one of its original adobe structures, then he used the Cinerama Dome featuring the film Krakatoa East of Java.

Over the next several months, Once Upon a Time In Hollywood might transform a neighborhood near you. My only wish is that they leave it all up when the movie wraps.

This article was originally published in
CURBED LA on July 25th, 2018